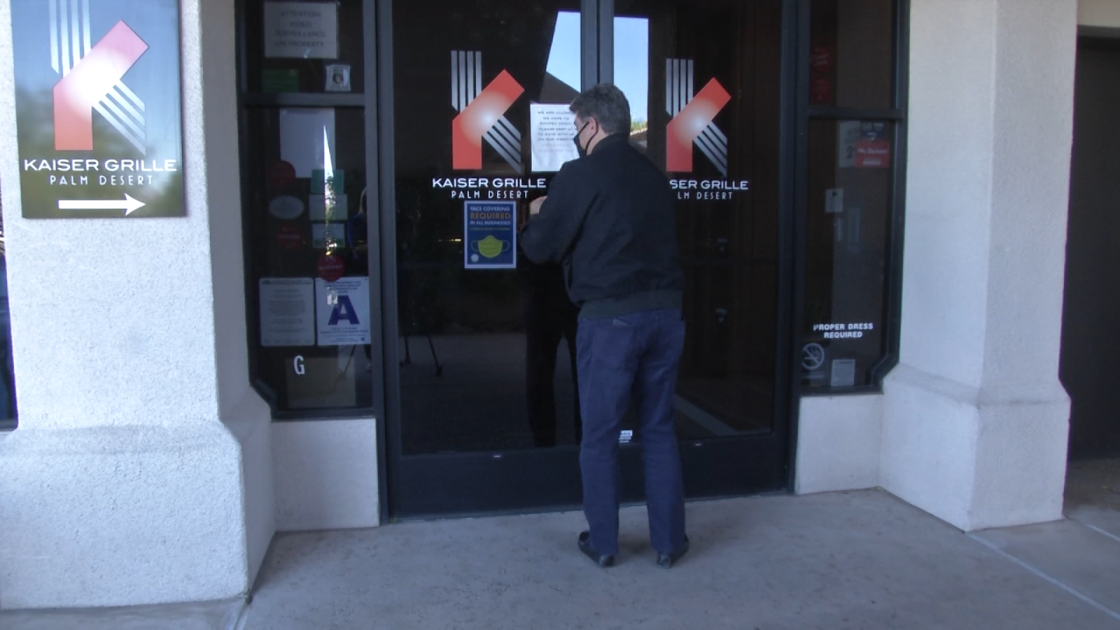 As Eric Morcus walks through his dark, shuttered restaurant, he can’t help but think of the customers, “These people used to come here once a week and every Monday, people over here come once a week, over here every couple of days so I don’t see it as a restaurant, I see it as memories we used to have.”

Memories of the good times.

“Laughing and smiling having a great time, it just had this energy, that you just can’t describe,” says Morcus with a nostalgic smile.

There haven’t been any good times at Kaiser Grille in Palm Desert since March, when the pandemic hit.

“On March 16, we were forced to shut down and everything came to a halt, you know March would have been a great month for us,” he says.

He’s not the only one taking a hit, he had 40 employees who relied on their jobs here to feed their families.

“Forty team members combined with their family members, it’s probably another 120, 150 people that it affected,” he says adding some are still waiting for him to open back up.

He applied for Payment Protection Plan Loans, (PPP) but you have to be open.

“Having all the loans in the world doesn’t do any good if you can’t open up and pay it back,” he says.

Now he hears the county is having another surge: nearly double the cases and triple the deaths in one day. That means he cannot reopen for at least another couple of weeks.

He now thinks about the others who have it worse than he does, The unsung heroes you know cause there’s a lot of small restaurants out there they’re gone.”

When he opened this restaurant six years ago, his dream was to honor his father, who opened the original Kaiser Grille,  and have a place where the people could come for great food and feel more like family. He did that.

“This is a very special place in our hearts,” says Morcus.

Now he says he just hopes he can hold on to that dream, “I want to be known as the guy who did his very best everyday of his life and didn’t give up.”

To find a COVID testing site near you click here: GET TESTED