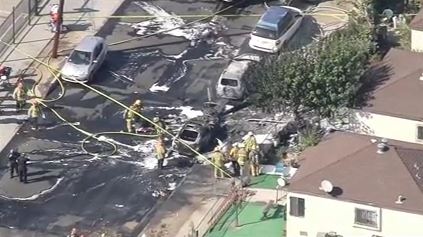 PACOIMA (CNS) – Federal Aviation Administration and National Transportation Safety Board investigators will be at the scene Friday of a Civil Air Patrol single-engine plane crash that occurred near Whiteman Airport in Pacoima and killed the pilot.

Firefighters were sent to the 10600 block of North Sutter Avenue at 11:44 a.m. Thursday, according to the Los Angeles Fire Department. The Cessna 172 crashed just short of the runway on the west side of the airport, coming down near three residential buildings.

“Firefighters extinguished the flames engulfing at least two vehicles and the wreckage after (the) small aircraft went down in a residential area,” the LAFD said in a statement. “The fire spread to trees and vegetation in front of a residential home, but firefighters navigated downed power lines and protected the home from sustaining any structural fire damage.”

The pilot, who was not immediately identified, was the sole occupant of the aircraft, which crashed on final approach to Runway 12. No bystander injuries were reported, according to the LAFD.

The plane, which was built in 2015, was owned by Civil Air Patrol, a nonprofit that assists the U.S. Government with emergency services and disaster relief.

A patrol volunteer at the airport who asked not to be identified told the Daily News the plane was en route to Pacoima from Bakersfield.

In audio obtained by CBS2, the pilot is heard saying to an air traffic controller, “Whiteman tower CAP439, we’ve got a loss of engine power here. We’re going to try and stretch it to the runway.”

The tower responds, “Runway’s clear and you are clear to land.”

Los Angeles Department of Water and Power crews were sent to repair the downed power lines.