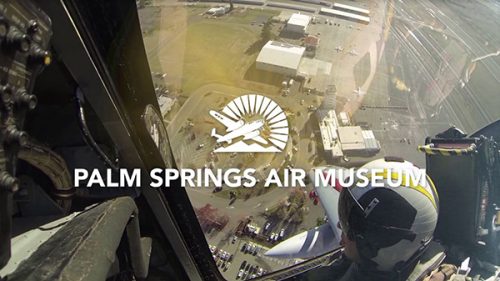 (CNS) – The Palm Springs Air Museum is ceasing most of its offerings for the next several weeks due to the state-mandated stay-at-home order in effect across Southern California.

The move affects the museum’s exhibits and hangars, but not its gift shop or flight operations. Museum officials noted the paradox of the partial closure beginning on National Pearl Harbor Remembrance Day, which marks the 79th anniversary of the Japanese attack on Pearl Harbor in Hawaii. The attack resulted in more than 2,400 casualties and the loss of U.S. Navy battleships and destroyers docked at the military installation.

“The date of the shutdown is ironic for our institution,” said Fred W. Bell, vice chairman of the museum. “On this date the United States was thrust into World War II. Now, as in that time long ago, we are at war, in this case with a deadly unseen enemy — COVID. We did not seek this circumstance, but we have to understand the reality of it.”

Several other popular Coachella Valley destinations, have also closed or significantly reduced their operations due to the regional stay-at-home order that went into effect Sunday just before midnight and is set to remain in place for at least three weeks.

The order calls for broad limits on day-to-day activity amid the ongoing second-wave surge in COVID-19 cases. The baseline determinant for implementation is 15% intensive care unit bed capacity. Any region where the number of beds falls below that threshold triggers the new lockdown. Southern California hit the trigger over the weekend.

The museum shut down fully in March amid rising coronavirus infection totals and reopened in June amid safety protocols aimed at curbing the spread of the virus.

Up-to-date information can be found at https://palmspringsairmuseum.org/.