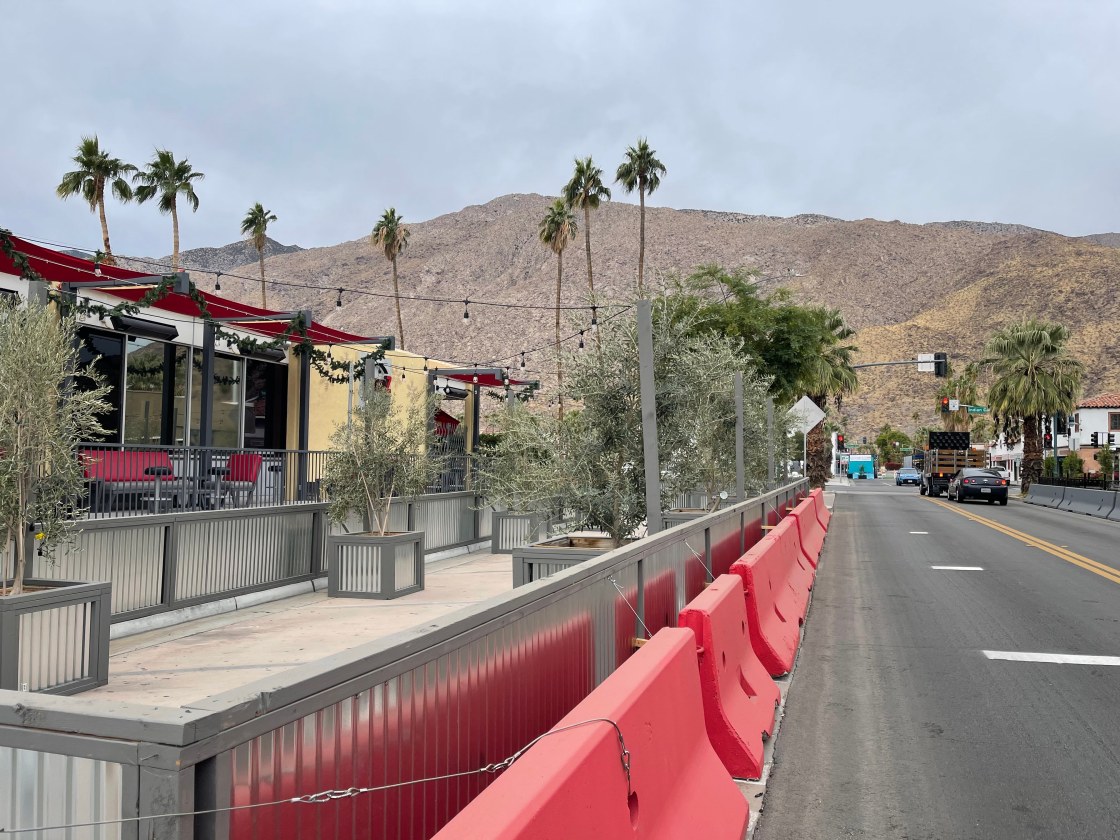 “They’re actually very nice about it but they do joke around, they go, back off code’s here,” says Bermudo about the business owners he visits during the day.

He’s greeted with empty patios and newly created outdoor dining spaces that should be busy at lunchtime.

“Sad to say right now they’re empty,” says Bermudo as he walks down near the empty sidewalk.

“Hi my name is Arwel, with the City of Palm Springs, he announces through the open door.

The owner tells him she and her daughter are their last employees left of six and she does everything from taking orders to cooking.

“Business is very tough, I can’t hire anyone, only by myself. I can’t afford to have people working, people no job,” says Nisa Henneke, who’s owned the restaurant since 2013.

Bermudo listens and steps inside to see their set up and reminds her of the rules, “When you have customers come in, make sure they’re wearing a mask.”

“And I see you have the hands free menu, that’s perfect,” says Bermudo, as he sees the QR code.

The visit was pleasant, but sad for Bermudo.

“I live in Palm Springs, I patronize most of these businesses here, so I understand, and it is, it can be you know difficult because you know especially now with the holiday season, of all the times to be closed down,” he says.

The City of Palm Springs says they’re focused on making sure their residents and visitors are safe, they were among the first to issue mask mandates and have been enforcing the guidelines, these latest ones will be enforced too. They feel the more they and everyone do their part to help slow the spread of COVID, the faster businesses can go back to normal operations. While the order looks at the regional ICU capacity at hospitals, Riverside County COVID numbers have been surging at a record pace in recent weeks.

“That’s going to mean our officers have to be proactive in doing business checks and ensure that they’re complying with the new orders,” he says.

But Villegas says they make an effort to educate business owners about the orders.

“Our goal is not to go out there to issue citations and to fine, our goal is to continue working together as a community to create that safe environment but we also understand the financial impact that’s going to have on our businesses,” says Villegas.

And that tough but empathetic stance shows during Bermudo’s next stop on Arenas Road, a little enclave of mostly LGBTQ bars where people come as they are to have fun. There’s no one around but Christmas songs fill the air.

Bermudo greets the manager of the bar, “Hi Mary, how’s it going?”

“Good nice to see you,” says Mary Bongard, the manager and bartender.

“I see you guys cleaning up,” says Bermudo.

“Yeah, we’re putting everything away, putting the goods away, taking what we can you know give it to the people here the food that we cannot use, like you said, the first day after it’s very eerie, it’s desolate,” says Bongard, adding, “and yesterday it was like beautiful.”

She cuts the small talk as she can’t hold back the tears.

“Yeah, it’s sad,” Bermudo tells her, in a voice a friend would use and a look of understanding.

“We just try and get through it, but it’s difficult, but we’ll take a deep breath we’re going to get through it but we don’t know what happens after that,” she tells him.

As Bermudo heads to his next inspection he can’t help but notice the irony of the Christmas songs and decorations, “It’s supposed to be the happiest time of the year and now they’re worried about making ends meet, so it’s sad.”