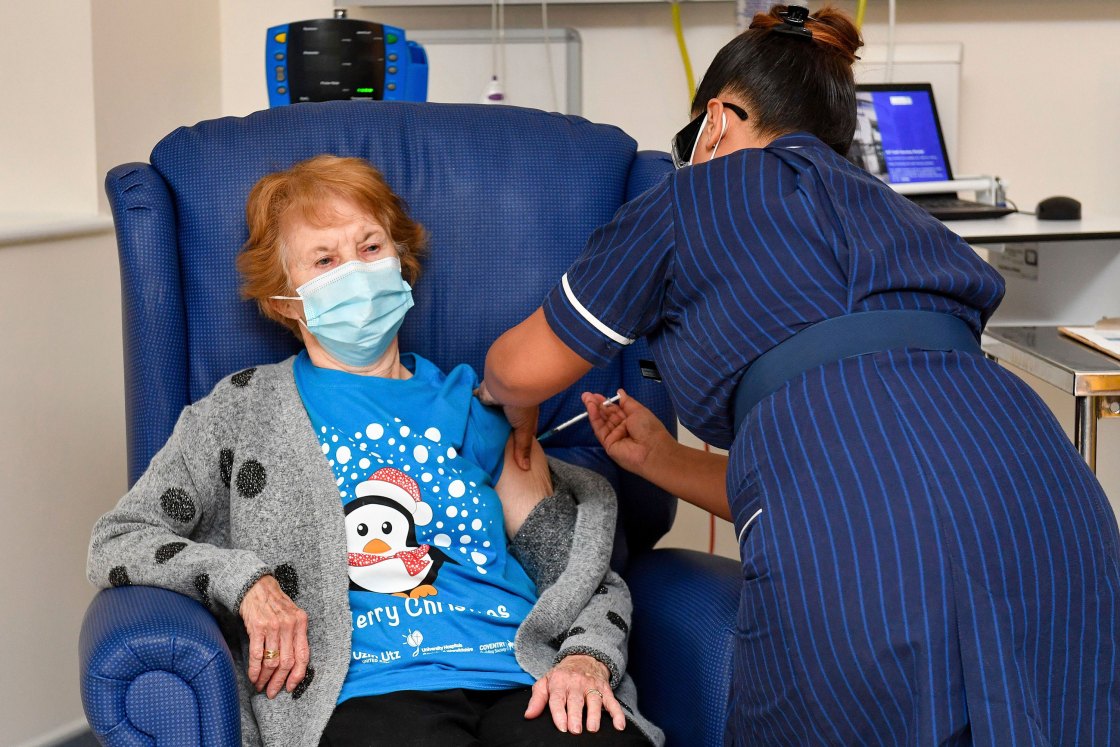 (CNN) — The United Kingdom has become the world’s first nation to begin vaccinating its citizens with a fully vetted and authorized Covid-19 shot, a landmark moment in the coronavirus pandemic.

The first Briton to get the Pfizer/BioNTech vaccine — 90-year-old Margaret Keenan — received the first of two doses at 6:31 a.m. local time on Tuesday at University Hospital in Coventry, less than a week after the UK became the first country to approve it.

Keenan, who turns 91 next week, said she felt “privileged” to be the first to get the shot.

“It’s the best early birthday present I could wish for because it means I can finally look forward to spending time with my family and friends in the New Year after being on my own for most of the year,” she said, according to a statement released by the UK’s National Health Service (NHS).

Keenan told UK media the shot was “fine, I wasn’t nervous at all,” calling it “wonderful, really.”

“This is for a good cause so I’m so pleased I had it done. This is a terrible, terrible disease so we do want rid of it,” she added.

Keenan advised others eligible for the vaccine to take up the offer: “I would say go for it,” she said. “If I can do it, well, so can you.”

May Parsons, the nurse who administered the first jab, said she was honored to be involved in the program.

“The last few months have been tough for all of us working in the NHS, but now it feels like there is light at the end of the tunnel,” said Parsons, who is originally from the Philippines and has worked in the NHS for 24 years.

William Shakespere, 81, known to friends as Bill, was the second person to get a Covid-19 vaccine at the Coventry hospital on Tuesday. Shakespere, a patient on the hospital’s frailty ward, sat with his grandchildren’s artwork nearby as he received the jab.

Nurse Joanna Sloan was the first person in Northern Ireland to receive the vaccine, while George Dyer became one of the first people in London to get the shot at Croydon Health Services.

“Covid-19 is a terrible thing and I feel very lucky that I can now get this vaccine to keep the virus away,” said Dyer, a former butcher and hospital volunteer. “It’s like I’m about to be given a new lease of life, and I cannot wait to get back out there and make myself useful again.”

Gill Rogers, whose husband died with the virus in residential care in April, was among the first to receive the vaccine in Sussex, in southeast England, on Tuesday.

The 86-year-old, who lives near Brighton, told the BBC it had been “quite hard” dealing with grief as well as isolation and that being given the shot meant she would not need to be so careful.

“I’m a bit pleased,” she said. “I shan’t be so careful, no, I shan’t be so worried, I will go in shops more and with luck I might get on to public transport.”

“I wasn’t doing much before, because while my husband was alive I was spending a lot of time going to the care home, so I’ve been pretty limited for a long time now,” she said.

The logistical challenges of manufacturing and distributing tens of millions of vaccines mean the roll-out will be gradual, with the most vulnerable people and health care workers first in line.

Visiting an NHS Covid-19 vaccination center in London, Johnson said: “It is important for people to understand that the virus is, alas, still rising in some parts of the country. It is rising for instance in London.”

He said the UK had reduced the spread of coronavirus, thanks to measures including England’s national lockdown in November.

“I would just say to all those who are scared, don’t be … you see people take the vaccine this morning, in large numbers, people are going to be taking it in the next few days, and weeks and there is nothing to be nervous about.”

Asked whether he was getting the vaccine himself, Johnson said: “I am not in the priority group … I’ve had it (the virus).”

The UK has ordered 40 million doses of the vaccine, but only 800,000 shots will be available as part of the first wave that began on Tuesday.

Because the vaccine requires two doses, administered at least three weeks apart, the UK will eventually have enough shots to vaccinate roughly a third of the country’s population.

The country has also ordered 7 million doses of the Moderna vaccine, which could be approved for emergency use in the UK within the next few weeks.

There will be 50 vaccination hubs in hospitals across England and dozens more across Wales and Scotland. People over 80 and frontline healthcare workers who are at the highest risk of serious illness from Covid-19 will be the first to be vaccinated.

In England, the first wave of vaccinations will only be administered in hospitals. In Wales, all health boards today began administering the country’s 40,000 doses — they hope to have given more than 6,000 jabs by the end of the week.

Keenan and the others will have to go back for the second dose in three or four weeks’ time. According to government guidance, each vaccinated person will be given a credit card-sized vaccination document with details of their next appointment. Seven to 10 days after the second dose, they should be protected against the virus.

The Pfizer/BioNTech vaccine offers 95% protection against Covid-19. According to the UK’s Medicines and Healthcare products Regulatory Agency (MHRA), more than one in 10 recipients may suffer side effects including pain at the injection site, headache, muscle pain, chills, joint pain, and fever. A handful of other, less common, side effects are also listed.

It is still unclear how long the immunity provided by the vaccine lasts for, or whether those who have had it can still transmit coronavirus to other people.

More than half of British adults say they would trust a coronavirus vaccine that has been approved for use, according to a Savanta ComRes poll for CNN affiliate ITV News.

According to the poll of 2,090 British adults, which was conducted between November 20 and 22 — before the Pfizer/BioNTech vaccine was approved for use in the UK — 57% of those questioned said they would trust a vaccine after approval, compared to 16% who said they would not trust one.

Nearly half (47%) of British adults said they were comfortable with Covid vaccines being developed faster than normal. Almost a quarter (23%) said they were not.

UK Health Secretary Matt Hancock called the beginning of the vaccination program a “big moment in scientific endeavor” on Tuesday, saying that the vaccine “can start to heal this disease right across the world, and protect people everywhere.”

In an interview with Sky News on Tuesday morning, Hancock said there was still “an enormous amount of work to do,” but that it may be possible to lift the UK’s coronavirus restrictions in the spring if enough people have been vaccinated by then. He urged the public to “hold our nerve and stick together and follow the rules.”

While the UK’s immunization program started with a big bang on Tuesday, the vaccine remains off limits to the vast majority of people.

For now, it is available by invitation only for those age 80 and over, care homes staff and front line health and social care workers. Care home residents were also expected to be prioritized, but the government said last week that this won’t happen immediately.

The NHS said in a statement on Tuesday that vaccine centers would be set up in venues including sporting venues and conference centers to treat large numbers of patients once further supplies of vaccine become available.

Hari Shukla, 87, from Tyne and Wear in England’s north east, is due to be one of the first to be vaccinated at a hospital in Newcastle later on Tuesday. Ahead of the jab, he thanked the UK’s National Health Service for its work throughout the pandemic, saying that its staff “have a heart of gold.”

“I’m so pleased we are hopefully coming towards the end of this pandemic and I am delighted to be doing my bit by having the vaccine, I feel it is my duty to do so and do whatever I can to help,” Shukla said in a NHS statement.

The US Food and Drug Administration is expected to follow the UK’s MHRA and authorize the emergency use for the Pfizer vaccine as soon as this week — its vaccine advisory committee is scheduled to meet on Thursday.

The European Medicines Agency will make its decision on the vaccine on December 29, according to the European Commission.