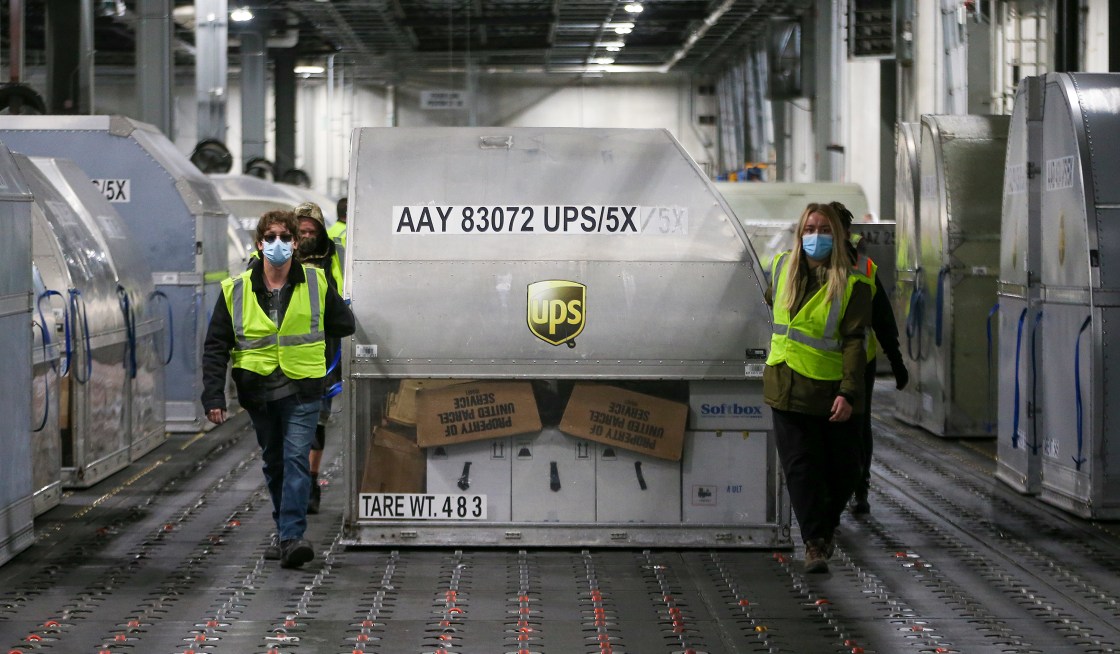 (CNN) — The first doses of an FDA-authorized Covid-19 vaccine have been delivered to all 50 states, the District of Columbia and Puerto Rico, less than a year after the disease was first spotted in the US, officials said Monday.

Operation Warp Speed, a public-private effort, developed the Pfizer vaccine in less than a year, an astonishing feat since most vaccines take years to develop. Now, the challenge is getting the vaccine to the hospitals and clinics for inoculations.

The first doses were injected Monday into health care workers — those at the front lines of the pandemic.

“We’re going to have enough for 20 million people to get vaccinated by the end of December and then, as I think I mentioned, enough for up to 50 million total by the end of January,” Health and Human Services Secretary Alex Azar told CNN’s Jake Tapper and Sanjay Gupta on Monday.

“As we move into February, we hope to have not only the Moderna and Pfizer vaccines, but Johnson & Johnson single-dose vaccine, AstraZeneca, potentially, that will increase supply even more.”

But it will be several months before most Americans can get a Covid-19 vaccine.

In the meantime, thousands of Americans are dying from the virus every day. On Monday afternoon, the national death toll from coronavirus-related reasons surpassed 300,000, according to Johns Hopkins University data.

And the rates of new infections and deaths are accelerating at unprecedented rates, meaning Americans must hunker down this winter before rolling up their sleeves.

Dr. Anthony Fauci, director of the National Institute of Allergy and Infectious Diseases, warned that Americans should not think the arrival of a vaccine means the end of the pandemic.

“I don’t believe we’re going to be able to throw the masks away and forget about physical separation in congregate settings for a while, probably likely until we get into the late fall and early next winter,” he said during a Center for Strategic and International Studies virtual health event. “But I think we can do it.”

Who’s getting the first Covid-19 vaccines

A critical care nurse was the first person in New York and among the first people in the country to get a first dose of the Pfizer/BioNTech vaccine.

Sandra Lindsay, an ICU nurse at Long Island Jewish Medical Center in Queens was given the shot at 9:20 a.m. ET Monday. She said the shot didn’t feel any different than any other vaccine.

“I’m feeling well. I would like to thank all the frontline workers and all my colleagues … doing their job during this pandemic all over the world,” she said.

“I feel hopeful today, relieved. I hope this marks the beginning of the end of a very painful time.”

The US Food and Drug Administration recently authorized the vaccine for emergency use, and the US Centers for Disease Control and Prevention has allowed it to be given to people 16 and older.

“We expect 145 sites across all the states to receive vaccine on Monday, another 425 sites on Tuesday, and the final 66 sites on Wednesday, which will complete the initial delivery of the Pfizer orders for vaccine,” said Gustave Perna, chief operating officer of Operation Warp Speed.

The next Covid-19 vaccine under consideration for emergency use authorization is Moderna’s candidate and, if authorized, the United States plans to ship about 6 million doses across the country in initial shipments, Perna said.

Each person who receives the Pfizer and Moderna vaccine needs two doses, and it’s up to states to allocate their share of vaccines.

But the CDC has recommended that health care workers and residents of long-term care facilities get the vaccine first.

‘This is a humbling moment,’ doctor said after vaccination

West Virginia Gov. Jim Justice was publicly vaccinated to show his faith in the vaccine.

“I want everyone to know that I think it’s good to go,” Justice, 69, said before taking his shot.

In Florida, the vaccine arrived Monday at Broward Memorial and UF Shands in Jacksonville, Gov. Ron DeSantis said. On Tuesday, Jackson Memorial in Miami and Advent Health in Orlando will receive shipments. DeSantis says the state of Florida anticipates having all 100,000 doses of the vaccination for all five hospitals by tomorrow morning.

Dr. Leon L. Haley Jr., the CEO of UF Health Jacksonville and dean of the University of Florida College of Medicine at Jacksonville, is believed to be the first person in Florida to be vaccinated. He was followed by other health care workers.

“This is a humbling moment,” Haley said. “I’d like to extend my deep appreciation on behalf of all of our frontline caregivers, here and around the world, for their resilience and heroism.”

The vaccine arrived as Florida became the fourth state in the nation to pass 20,000 coronavirus-related deaths, joining New York, Texas and California.

Four hospitals in California received a total of 33,150 Covid-19 vaccine doses on Monday, Gov. Gavin Newsom announced, just minutes after some of the first health care workers in the state were vaccinated at Kaiser Permanente Los Angeles Medical Center.

“There’s a light at the end of the tunnel, but we’re still in the tunnel,” Newsom said, as the state continues to battle its worst rise in infections and hospitalizations since the start of the pandemic.

Monday’s shipments were sent to hospitals in Los Angeles, San Diego and Northern California. On Tuesday, 24 additional sites are expected to receive vaccine shipments, and five more sites will receive the doses on Wednesday, Newsom elaborated.

In Nevada, Gov. Steve Sisolak extended Covid-19 restrictions until January 15, saying the state is still seeing the fallout from a Thanksgiving-induced Covid-19 surge.

“We are at a critical point,” Sisolak said Sunday. “We will be monitoring and evaluating our current situation day to day and week by week will remain under the current restrictions for now, with the goal of getting through the next month.”

While he did not say exactly when vaccinations would start, Sisolak said plans are in place to distribute the first allocation to frontline health care workers and staff and residents in the nursing facilities for “immediate vaccination.”

In Washington, Gov. Jay Inslee said public vaccinations in his state are expected to begin Tuesday.

An initial 62,000 doses will be distributed to 40 facilities and 29 counties, said Michele Roberts, acting assistant secretary of the Washington Department of Health.

Since the number of available vaccines will be limited for months — and since each person needs two doses of Pfizer/BioNTech vaccine — officials say wearing masks is just as important now as it was last week.

“I want to be clear, this does not change the importance of our safety precautions,” Inslee said.

“Masking, physical distancing and limiting interactions is just as important tomorrow as it was yesterday.”

Effectiveness of the vaccine ‘going to be gradual,’ Fauci says

The vaccine will not have instantaneous effects, according to Fauci.

“It’s not going to be like turning a light switch on and off,” he said. “It’s going to be gradual, and I think we will know when we see the level of infection in the country at a dramatically lower level than it is right now that we can start gradually tiptoeing towards normality.”

“I think we will probably know, if the vaccine rollout works the way I hope it does, that we get the overwhelming majority of the people vaccinated in this country by the end of the second quarter,” he said. “And we have that veil of protective immunity, we should know … by the end of 2021, as we go into 2022, what the durability is and whether or not we’re dealing with something that needs to be reboosted every year.”

How many doses are coming?

About 2.9 million doses of the vaccine either have been or will be received nationwide this week. That’s enough to start vaccinating 1.45 million people.

The US Department of Health and Human Services will start announcing how many more Covid-19 vaccines will go out each week, Azar said.

“Each Friday from here on out, we will announce new weekly allocations of the vaccine,” he said during a news conference Monday.

Azar told CNN that he wants to get vaccinated against Covid-19 as soon as he can.

“I want to get vaccinated as soon as possible and I want to do it on TV, because I want the American people to see my complete confidence in the integrity of the system,” he told Tapper. “I want them to see that I wouldn’t ask them to do something that I wouldn’t do myself.”