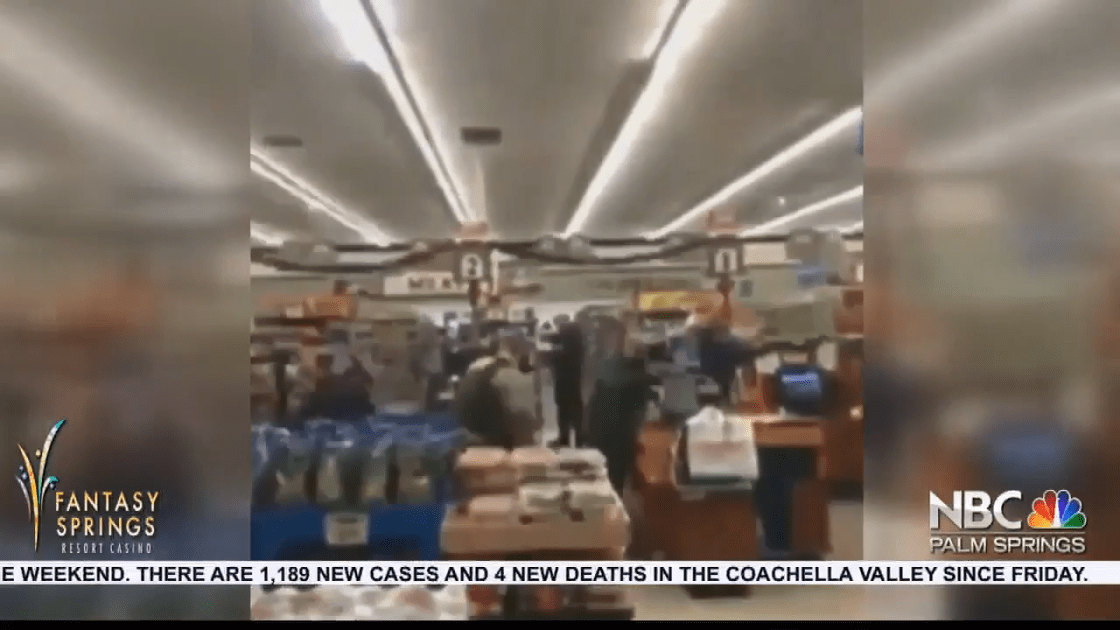 RIVERSIDE (CNS) – Riverside County Sheriff Chad Bianco Monday released video and shared details regarding the death of a 33-year-old convicted felon who died while handcuffed in a Jurupa Valley grocery store, where he spent hours erratically coming and going while under the influence of drugs.

“This is in the interest of transparency,” Bianco said during a media briefing at sheriff’s headquarters in downtown Riverside. “It is a sad and tragic event for all of us. My condolences go out to the family.”

Ernie Teddy Serrano of Jurupa Valley died on Dec. 15 after a struggle with patrol deputies at a store on Crestmore Road. According to Bianco, an initial autopsy indicated Serrano had methamphetamine, marijuana and other drugs in his system.

Several parallel investigations are underway, with the District Attorney’s Office taking the lead on the use-of-force decisions on the part of the half-dozen responding deputies.

Bianco said encounters with Serrano began on the evening of Dec. 14, when the suspect’s family called 911 complaining that he was “not acting rationally, and was `out of control.”‘

Deputies went to the residence and found Serrano — who had several prior convictions in Los Angeles and Orange counties, including for assault on a peace officer–

“belligerent, aggressive and displaying obvious signs of being under the influence,” the sheriff said.

“Deputies used a Taser to force Mr. Serrano to comply,” Bianco said. “He was treated at a local hospital and taken to the Robert Presley Detention Center.”

Serrano was booked on suspicion of being under the influence of a controlled substance and felony obstructing a peace officer. However, because the county correctional system is operating under court-mandated capacity limitations due to the coronavirus public health emergency, Serrano was released on his own recognizance the following morning.

That evening, he went to the market, and for the next “two to three hours”  floated in and out of the store, exhibiting bizarre behavior, “cutting in front of people in the shopping aisles” and on several occasions trying to buy goods by offering his driver’s license as a payment device, according to the sheriff.

Bianco showed two videos — one from a deputy-worn body camera, the other from store security surveillance tape — that documented the final 30 minutes of what transpired in the business.

The tape showed the suspect going from one checkout lane to another, stepping in front of customers or attempting to conduct a transaction while others were handling their own. Multiple store employees, including managers, engaged Serrano, gesturing for him to leave or move aside. No one appeared aggressive as the suspect aimlessly wandered back and forth, holding a bag of groceries.

An armed security guard, who was apparently called to the location, confronted Serrano in a checkout lane and tried to escort him out of the store, at which point a tussle ensued.

Over five to 10 minutes, the guard and Serrano fought, with the latter battling the guard’s attempts to pull him toward the front of the store. The guard deployed both a Taser and pepper spray to subdue Serrano, whom Bianco alleged “tried to remove the guard’s handgun.”

The non-lethal products had no effect on the suspect, and when deputies rushed into the business, the struggle was still in full swing, according to the video footage. The guard broke off combat when the deputies approached.

“Our deputies intervened and tried to detain Mr. Serrano, but he did not comply,” Bianco said. “A Taser was used, and he fell to the ground, but then he got back on his feet.”

Images showed a deputy using his baton on the suspect’s right arm and leg to make him desist, but Serrano seemed impervious to the strikes. Another deputy then tackled the suspect, and with the help of three others, corralled him, pushing him onto a checkout counter, using two sets of handcuffs to restrain him.

“My name is Ernie Serrano!” the suspect shouted, giving his date of birth. “Let me go! Let me go! Why did you tase me?”

Serrano was bleeding from a gash over his left eye, and the blood was flowing into his mouth, prompting him to spit numerous times. As a health precaution, a “spit shield” was placed over his head, according to Bianco.

“Take the mask off!” Serrano said, coughing and seemingly short of breath.

A deputy who was involved in the prior day’s arrest noted that when he and his partner took Serrano to a hospital for a pre-booking medical examination, “his heart rate was like 190.”

Deputies held Serrano on the checkout counter for about seven or eight minutes, repeatedly asking him to calm down. However, he abruptly went silent and limp, at which point a corporal yelled, “He’s stopped breathing.”

Serrano was laid on the floor, where deputies removed the handcuffs and mask, initiating chest compressions for Cal Fire paramedics, who had been staging outside the store. They tried to revive him, but ge was pronounced dead a short time later at Riverside Community Hospital.

“The death was determined to be acute methamphetamine intoxication with fatal arrhythmia,” Bianco said.