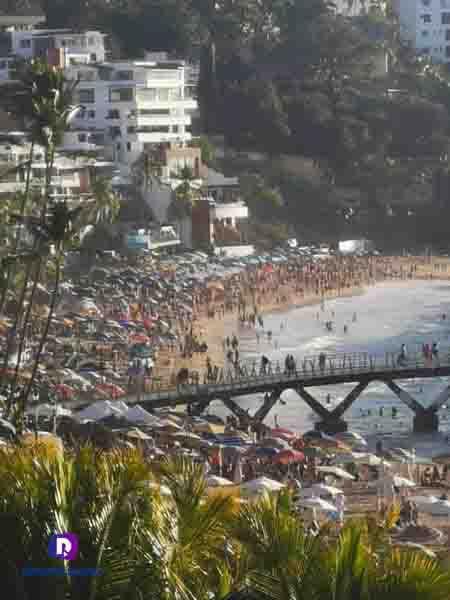 Copy
Jeffrey Sanker, the promoter for the annual Palm Springs White Party, is under fire for hosting what critics are calling a “super-spreader” event New Years weekend.
Despite pleas from local officials and residents, Sanker proceeded with holding New Years White Party in the Mexican resort of Nuevo Vallarta.  Originally set to take place in nearby Puerto Vallarta, government officials and city leaders there demanded that Sanker cancel the event because of the critical situation there with Covid.
The City of Puerto Vallarta and state of Jalisco where Puerto Vallarta is located are under severe lockdown as hospitals are filled to capacity.  Mexico has the third highest death rate per capita in the world for Covid, and the positivity rate there is 65%, though testing has been lacking.
When word spread that Sanker was planning a huge party bringing in thousands of revelers from North America including many from Southern California, locals protested and the local government ordered a halt to the event.  But instead of cancelling the event, Sanker moved it to “an undisclosed” location in Nuevo Vallarta, which although only 10 miles from Puerto Vallarta, is in a different state with fewer restrictions.
In a text to ticket holders, Sanker’s White Party Entertainment Inc told attendees to not reveal the location of the party.  Nor could they take any photos or videos of the event.  The text said the steps were necessary because they “do not want this getting out and causing any issues with the public.”
However, local news media was tipped to the event resulting in a major backlash against Sanker.

The Puerto Vallarta News reports “If you are interested in still visiting the COVID Superspreader New Years Eve Celebration where foreigners come to our community and throw big parties and leave COVID while causing our businesses to close and people lose their jobs, they have changed their mega party to

Riviera Nayarit and even offer a nice closed bus to transport you there with a lot of people packed together.  COVID isn’t causing businesses to suffer, it’s the actions of people. We are tired of it. We have supported this event in past years and given it positive coverage, but this year it’s irresponsible and should be canceled.​”​ 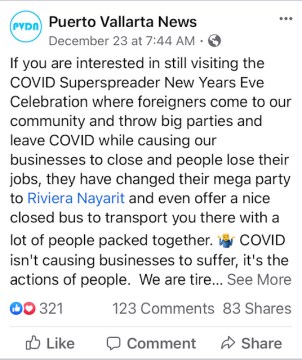 ​While the event was held in a neighboring community, the majority of the attendees reportedly stayed in Puerto Vallarta.  As a result, beaches were jammed wall to wall mostly with maskless celebrants.  One local resident who provided pictures and video to NBC Palm Springs said it was a “superspreader nightmare.” 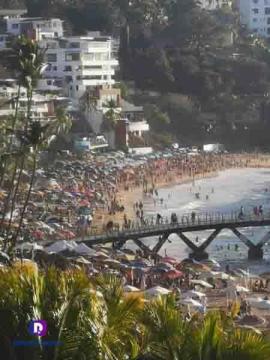 During the weekend festivities​, a party boat that featured a day cruise including a live band and open bar began taking on water and sank off the coast of Puerto Vallarta.  Video posted on social media shows 10 boats rushing to the sinking “PV Delice” and plucking 57 victims out of the choppy water.  Witnesses tell local news outlets that the boat was overcrowded.
Passenger Emilio Blanco told Out and About PV, “It was like the Titantic, it went all down slowly. I think the crew just didn’t know how to maneuver the catamaran very well, the sea was not very rough nor was it too windy. We were about to sail back to Puerto Vallarta, but the catamaran barely moved. I saw at least 10 small boats coming to help, I jumped in a private boat whose owners were graceful enough to send their captain help out. It was quite a scary situation!”
The boat sank to the bottom of the bay.  There were no reports of injuries.
Last spring, Sanker was forced to cancel the White Party in Palm Springs after the city imposed restrictions on large gatherings in the wake of Covid. Though the restrictions are still in effect, Sanker is proceeding with plans to hold the White Party this April in Palm Springs.  Tickets are currently on sale on his website.