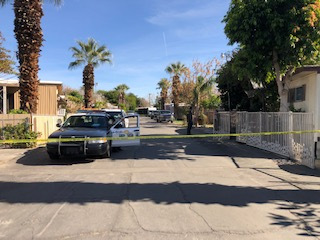 INDIO (CNS) – A 29-year-old man accused of gunning down his wife at a mobile home park in La Quinta while their children slept nearby appeared in an Indio courtroom Monday, where his attorney signaled plans to seek the dismissal of the murder case against his client.

Jose Valles Meza of La Quinta was arrested on Jan. 27, 2019, on suspicion of killing Patricia Cesena, 26, who was found dead inside a residence in the Dune Palms Mobile Estates at 46400 Dune Palms Road.

At a preliminary hearing at the Larson Justice Center in Indio in November, Riverside County Superior Court Judge Charles Stafford ruled that prosecutors presented sufficient evidence for Meza to proceed to trial on one count of first-degree murder.

Meza was additionally held to answer on a special circumstance allegation of lying in wait, which makes him eligible for the death penalty if prosecutors choose to pursue it.

On Monday, Richard Verlato, Meza’s public defender, said he intends to file a motion in time for his client’s next court appearance — a Feb. 22 trial-readiness conference — in a quest to get the case dismissed — on what grounds, he did not specify.

The defendant, meanwhile, remains in custody without bail at the Smith Correctional Facility in Banning.

California Highway Patrol Officer Michael Bernardino testified at the November preliminary hearing that the investigation into the woman’s slaying stemmed from a 3:30 a.m. traffic stop in Imperial County. The defendant was pulled over for speeding and was subsequently taken into custody on suspicion of drunken driving, the officer said. Once at the local jail, Meza told the officer he “witnessed a murder,” Bernardino testified.

Riverside County sheriff’s deputies were sent to the Dune Palms Road address to conduct a welfare check, and found Cesena dead about 5:50 that morning inside the mobile home, according to the sheriff’s department.

According to Alfaro, the victim suffered a single gunshot wound to the head, which appeared to have been fired from outside the home.

Sheriff’s Investigator Armando Munoz testified that one of the children, an 8-year-old girl, said in an interview after the shooting that her parents often fought, and that cameras were placed throughout the house because her father believed her mother was inviting other men to the home.