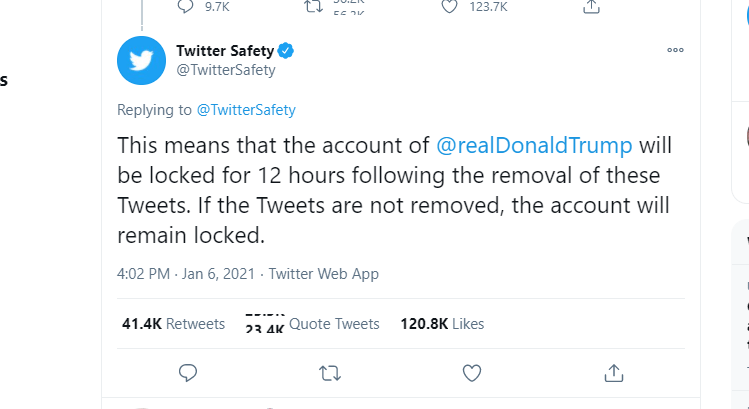 (CNN) — Facebook, Twitter and YouTube took action on President Donald Trump’s posts Wednesday in the wake of riots at the US Capitol from his supporters, but the platforms stopped short of suspending the President’s accounts despite growing pressure from advocacy groups and prominent figures.

Facebook and YouTube each removed President Donald Trump’s video from earlier in the afternoon addressing his supporters, according to company spokesmen. In the video, Trump had urged Capitol rioters to “go home” but struck a sympathetic tone and reiterated his debunked claims of election fraud.

Our Response to the Violence in Washington https://t.co/zN50YR8XLR

“This is an emergency situation and we are taking appropriate emergency measures, including removing President Trump’s video,” Guy Rosen, Facebook’s VP of integrity, said in a tweet. “We removed it because on balance we believe it contributes to rather than diminishes the risk of ongoing violence.”

This is an emergency situation and we are taking appropriate emergency measures, including removing President Trump's video. We removed it because on balance we believe it contributes to rather than diminishes the risk of ongoing violence.

Twitter did not remove the video. But as of Wednesday afternoon, the social network did move to restrict engagement with tweets by Trump and others that have been labeled “due to a risk of violence.”

As a result of the unprecedented and ongoing violent situation in Washington, D.C., we have required the removal of three @realDonaldTrump Tweets that were posted earlier today for repeated and severe violations of our Civic Integrity policy. https://t.co/k6OkjNG3bM

Future violations of the Twitter Rules, including our Civic Integrity or Violent Threats policies, will result in permanent suspension of the @realDonaldTrump account.

Likes and replies have been disabled on Trump’s tweet that claimed Vice President Mike Pence “didn’t have the courage to do what should have been done.” Retweets of the tweet have been restricted, prompting users to add a comment rather than simply amplifying Trump’s remarks.

Those same restrictions were also applied to the video to Trump’s supporters.

“In regard to the ongoing situation in Washington, D.C., we are working proactively to protect the health of the public conversation occurring on the service and will take action on any content that violates the Twitter Rules,” Twitter said.

“Threats of and calls to violence are against the Twitter Rules, and we are enforcing our policies accordingly. In addition, we have been significantly restricting engagement with Tweets labeled under our Civic Integrity Policy due to the risk of violence. This means these labeled Tweets will not be able to be replied to, Retweeted, or liked.”

Twitter is still considering other “escalated enforcement actions,” it added.

Facebook condemned the riots at the US Capitol on Wednesday, but stopped short of saying Trump would be blocked from the social media platform.

“The violent protests in the Capitol today are a disgrace,” said Facebook spokesman Andy Stone in a statement to CNN Business. “We prohibit incitement and calls for violence on our platform. We are actively reviewing and removing any content that breaks these rules.”

“President Trump has a responsibility to call for an end to this violence and unrest that he has sowed. His campaign of disinformation is a clear and present danger to our democracy,” said ADL CEO Jonathan Greenblatt. “But until such time as that happens, social media companies should suspend his accounts ASAP as they would do for anyone else advocating disinformation and promoting violence. It’s time.”

“Hey Mark Zuckerberg, @jack, @SusanWojcicki and @sundarpichai — Donald Trump just incited a violent attack on American democracy. Is that FINALLY enough for you to act?!”

Facebook did not respond to multiple requests for comment on whether it would take action on Trump’s account. The companies have applied contextual labels to Trump’s posts in recent days, but since the November election it has become increasingly clear that the labels are inadequate to the task.