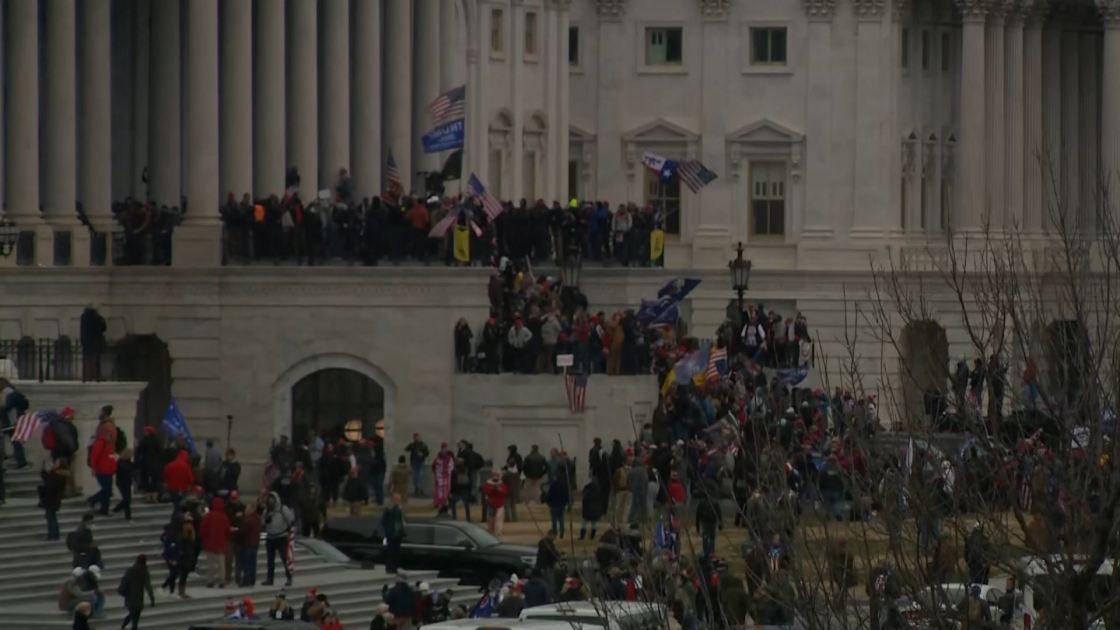 Twitter confirms they had something to do with the removal of three of President Trump’s Tweets.

As a result of the unprecedented and ongoing violent situation in Washington, D.C., we have required the removal of three @realDonaldTrump Tweets that were posted earlier today for repeated and severe violations of our Civic Integrity policy. https://t.co/k6OkjNG3bM

Future violations of the Twitter Rules, including our Civic Integrity or Violent Threats policies, will result in permanent suspension of the @realDonaldTrump account.

Multiple Tweets from President Trump have been removed from Twitter, including the video message he posted.

It is unclear if the social media platform removed them or the President himself, but the video message was also removed from Instagram.

President Trump makes another remark on Twitter telling supporters to, “go home with love & in peace.”

These are the things and events that happen when a sacred landslide election victory is so unceremoniously & viciously stripped away from great patriots who have been badly & unfairly treated for so long. Go home with love & in peace. Remember this day forever!

Representative Raul Ruiz also took to Twitter to say he is safe:

I am safe and in a secure location following the guidance of the Capitol police.

We will not allow today’s assault on our democracy to deter us from carrying out our constitutional duties. We will continue the work of the American people.

According to NBC News, law enforcement confirms the woman who was shot inside the Capitol building has died

Very grateful to front line police but incredibly upset those in charge lost control of the US Capitol.

Will not let this go unchallenged. (2/2)

One person was shot as result of the protests.

Mayor Bowser said there will be law and order and this behavior will not be tolerated.

“Today what we witnessed was unlawful behavior,” said Police Chief Robert Contee. He also addressed the citywide curfew officials set in place beginning at 6:00 PM Wednesday expiring at 6:00 AM Thursday.

Today, I'm ordering a citywide curfew for the District of Columbia from 6:00 p.m. on Wednesday, January 6, until 6:00 a.m. on Thursday, January 7. pic.twitter.com/lp6Pt3DcYC

What we’re witnessing in the US Capitol is reprehensible. An outright assault to our democratic institutions.

Our hearts are with our Congressional Delegation and the brave public servants that work in our Capitol every day. pic.twitter.com/Qwjry6AhVw

President-Elect Joe Biden takes the podium to address the situation.

Biden has called on President Trump to go on TV and demand and end.

“President Trump, step up. God Bless America and God Bless our Troops. Sorry for keeping you waiting,” said Biden as he departed the stage.

NBC Palm Springs has heard from Rep. Raul Ruiz that he has been told to evacuate his office.

The US Capitol is on lockdown as hundreds of demonstrators fill the steps of the Capitol with some entering the building.

Congress was meeting to count the electoral votes in the final step in solidifying President-Elect Joe Biden’s win.

The protests forced a recess in the Senate debate and the House of Representatives was evacuated.

According to NBC News, members of Congress were handed gas masks as they were being evacuated.

Several other protests have also broke out across the Country including: Los Angeles, Georgia, Oregon, Missouri, Florida and several more locations.

President Trump put out two Tweets since news of the protests.

Mike Pence didn’t have the courage to do what should have been done to protect our Country and our Constitution, giving States a chance to certify a corrected set of facts, not the fraudulent or inaccurate ones which they were asked to previously certify. USA demands the truth!

Please support our Capitol Police and Law Enforcement. They are truly on the side of our Country. Stay peaceful!

I am asking for everyone at the U.S. Capitol to remain peaceful. No violence! Remember, WE are the Party of Law & Order – respect the Law and our great men and women in Blue. Thank you!

Representative Peter Welch of Vermont took to Twitter to share an update from inside the Capitol during the announcement of the lockdown.

This story is developing and will continue to be updated. This article has been updated since first posted.