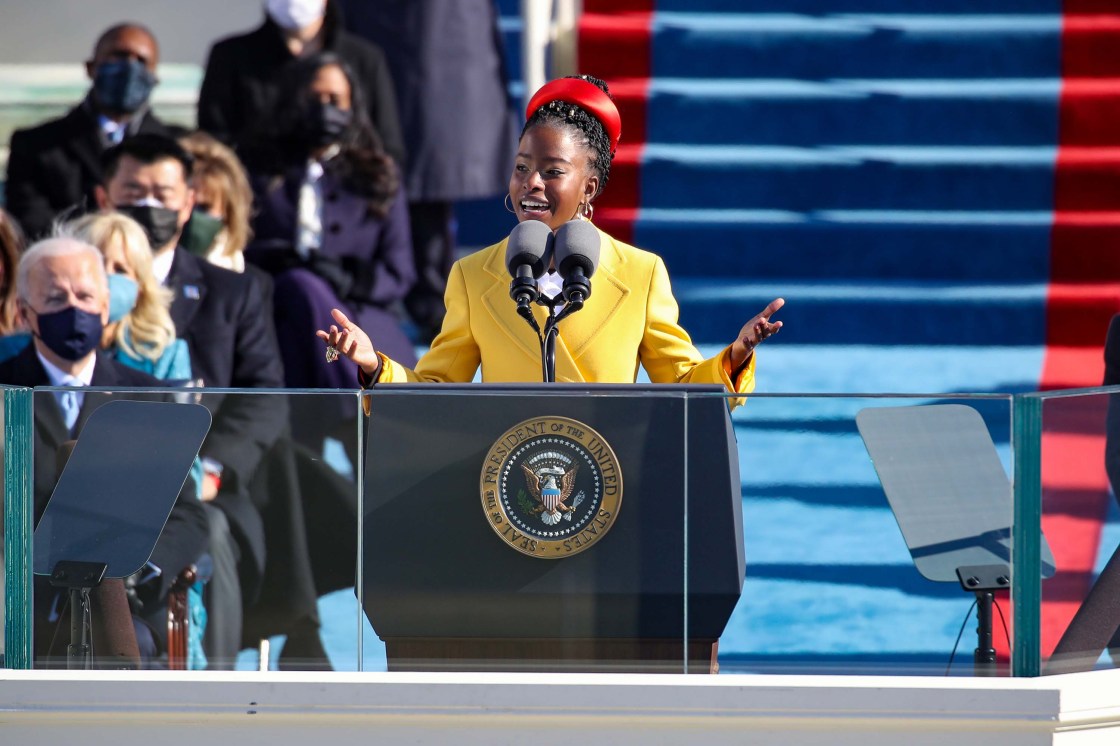 Her composition also acknowledged the recent violence at the U.S. Capitol and sent a message of hope for the future. The poem reads, in part:

“We’ve seen a force that would shatter our nation rather than share it; would destroy our country if it meant delaying democracy. And this effort very nearly succeeded. But while democracy can be periodically delayed, it can never be permanently defeated. In this truth, in this faith, we trust. For while we have our eyes on the future, history has its eyes on us.”

Gorman turned to writing at an early age in an attempt to cope with her speech impediment. At age 14, she joined WriteGirl, a Los Angeles-based nonprofit organization that helps teen girls discover the power of their voice through creative writing.

“WriteGirl has been pivotal in my life,” she said. “It’s been thanks to their support that I’ve been able to chase my dreams as a writer.”

WriteGirl Executive Director Keren Taylor said she had “no doubt Amanda’s messages of hope, unity and justice will help us all heal and move forward.”

Gorman has two books forthcoming, including her first children’s book, “Change Sings,” set to be published in September.

Gorman was the sixth poet to perform at a presidential inauguration, continuing an intermittent tradition begun in 1961 when Robert Frost recited “The Gift Outright” at John F. Kennedy’s inauguration. The previous youngest was Richard Blanco, who was 44 when he read “One Today” at Barack Obama’s second inauguration in 2013.

All the inaugural poets have performed at the swearings-in of Democratic presidents.

The inauguration of Biden as president and Kamala Harris as vice president began at 7:30 a.m. PST. Gorman’s performance followed a rendition of the national anthem by Lady Gaga and a musical performance by Jennifer Lopez.

The ceremony featured vigorous health and safety protocols, including face coverings and social distancing to help prevent the spread of coronavirus, and the public was strongly encouraged to refrain from traveling to Washington, D.C. A field of American flags were placed in the National Mall to represent the many people who otherwise would have been there to watch the inauguration for the 46th president.

Other inaugural events also were converted to virtual events, including the “Parade Across America,” billed by the inaugural committee as featuring diverse, dynamic performances in communities in all 56 states and territories, celebrating America’s heroes, and highlighting the diversity, heritage and resilience of the nation.

The Trans Chorus of Los Angeles will be among the parade participants as part of DJ Cassidy’s “Pass The Mic,” which will also feature Earth Wind & Fire, Nile Rodgers and Kathy Sledge.

The chorus was formed in 2015. It describes itself as the nation’s first all trans-identified chorus, consisting of transgender, non-binary, intersex, gender-non-conforming and gender-fluid individuals.

The parade, set to begin at 12:15 p.m. PST, will be hosted by actor, director and producer Tony Goldwyn. Other participants include comedian Jon Stewart, the alternative rock band New Radicals, performing together for the first time since 1999, Phoenix Suns guard Chris Paul and Olympians Allyson Felix, Katie Ledecky and Nathan Chen.