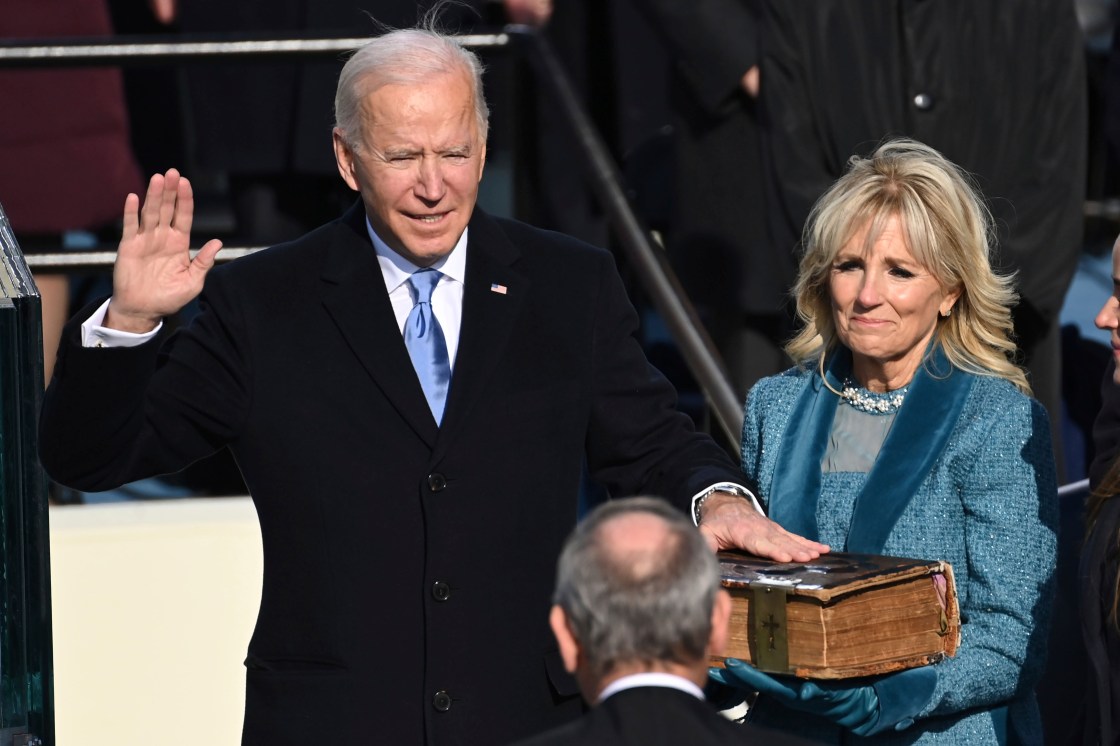 President Joe Biden was sworn in as the 46th president of the United States Wednesday, ushering in a new era of calm and comity to Washington after four divisive and tumultuous years under former President Donald Trump.

Standing at the Capitol just two weeks after a mob of insurrectionists invaded that building seeking to overturn the presidential election based on Trump’s lies about the results, Biden set out on the daunting task of uniting the nation by urging Americans to come together as they confront the deadly pandemic, an economic collapse that has left millions unemployed and deep divisions over issues of racial justice and police brutality.

“Today on this January day, my whole soul is in this — bringing American people together, uniting our nation, and I ask every American to join me in this cause,” Biden said in his inaugural speech.

The former vice president, who decided to run for the White House after Trump’s shocking reaction to the White supremacist rally in Charlottesville, Virginia, in 2017, noted that the nation is struggling through a rise of White nationalism, racism and deep political divisions.

“Politics doesn’t have to be a raging fire destroying everything in its path,” Biden said, calling on Americans to come together. “We have to be different than this. America has to be better than this.”

Moments earlier, he was sworn in with his hand on the Biden family Bible, which has a Celtic Cross on the cover and has been a family heirloom since 1893. The President-elect has used the Bible each time he has taken an oath of office, both as a senator from Delaware and as vice president, and his son Beau Biden used the Bible when he was sworn in as attorney general of Delaware in 2007.

Vice President Kamala Harris made history Wednesday when she was sworn in as the first female, the first Black and first South Asian vice president of the United States.

After a tumultuous year that began a new chapter of the civil rights movement as Americans took to the streets to protest against racial injustice and police brutality after the death of George Floyd, the swearing in was a remarkable achievement for a country that has often struggled to live up to its ideals of equality for all.

Biden noted the historic nature of Harris’ swearing in during his speech: “Don’t tell me things can’t change.”

Harris was sworn in on two Bibles — one that belonged to former Supreme Court Justice Thurgood Marshall, one of her heroes who inspired her to pursue a career in the law, and that of Regina Shelton, a neighbor who cared for Harris and her sister Maya when they were growing up and attended church with her, where she was introduced to the teachings of the Bible. Harris has described Shelton as a “second mother to us.”

Trump, who was the first president in more than 150 years to refuse to attend his successor’s swearing-in ceremony, had arrived in Florida by the time Biden was sworn in.

Former Vice President Mike Pence, who was in the Capitol when it was stormed by a violent mob earlier this month, and second lady Karen Pence walked out onto the inaugural stands to bipartisan applause.

More than 25,000 National Guard troops were in place to ensure that the nation’s transfer of power could take place peacefully.