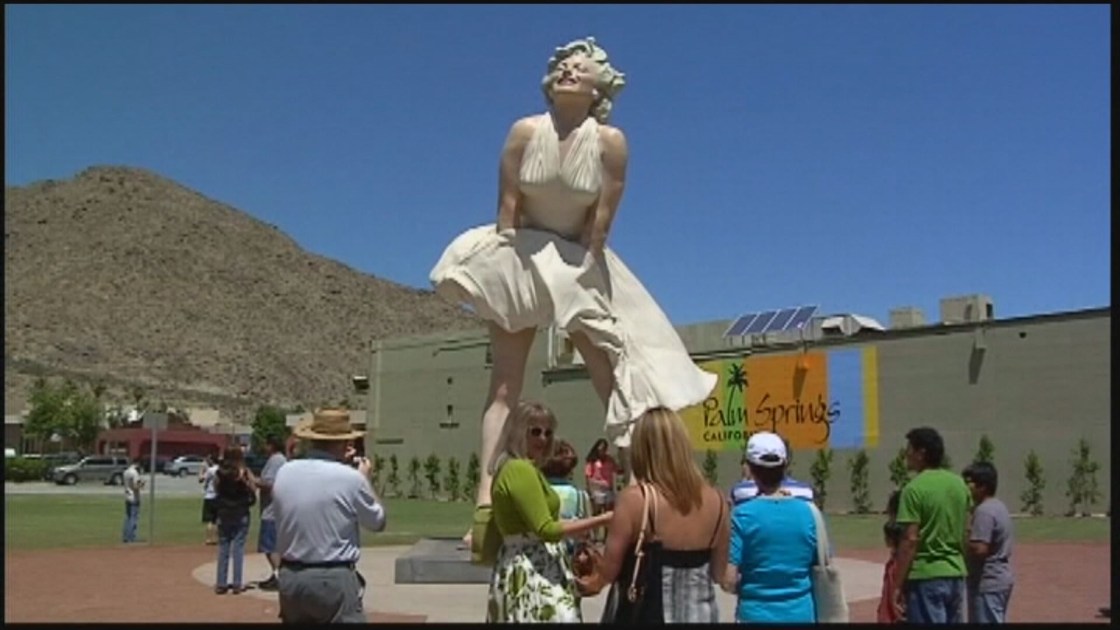 An enormous sculpture depicting Marilyn Monroe’s iconic dress-flying pose from the 1955 romantic comedy “The Seven Year Itch” is expected to return to Palm Springs at the end of next month, tourism officials confirmed Wednesday.

PS Resorts, a nonprofit tourism organization, finalized a deal this week with Seward Johnson Atelier to purchase the 26-foot-tall sculpture dubbed “Forever Marilyn” for $1 million, plus installation costs, according to Aftab Dada, the organization’s chairman.

Dada said a final installation date is tentatively set for March 28, which could change given the availability of the installation crew. The Desert Sun was the first to report the impending return of “Forever Marilyn,” which will make its way from storage in New Jersey, where it resides in “hundreds of pieces,” to its new home in Palm Springs, Dada said.

It will be installed on city-owned land on Museum Way, west of Belardo Road and east of Museum Drive, just east of the Palm Springs Art Museum.

The Palm Springs City Council approved a location agreement with PS Resorts last December. The agreement includes a term of up to three years, and requires periodic updates back to the council.

Dada said he would like to see the statue remain at the Museum Way location permanently. After two years, the statue’s local economic impact will be measured by an outside firm, he said.

The 17-ton statue crafted of steel and aluminum was first unveiled in Chicago in 2011 before moving to the corner of Palm Canyon Drive and Tahquitz Canyon Way in Palm Springs in 2012, where it was on display for about two years.

The statue’s looming return has drawn the ire of some residents, both for its possible infringement of views of the surrounding natural landscape, and on allegations that the statue is sexist and inappropriate, the Desert Sun reported.

Dada countered that the statue is an economic powerhouse that brought the city millions of dollars of free publicity during its first rendezvous in Palm Springs. Dada said “Forever Marilyn” helped jumpstart the local economy during the Great Recession, and he hopes the statue can work that same magic again amid the coronavirus pandemic.

“She really put Palm Springs on the worldwide map,” he said. “She is definitely a huge draw and an unbelievable magnets to tourists.”

City Manager David Ready previously said the statue was a “tourism phenomenon” during its first appearance in the city.

The humongous sculpture recreates the moment in “The Seven Year Itch” where Monroe’s white dress surges up toward her waist as she stands on a windy Manhattan subway grate.

“Marilyn has come to represent beauty, and the white dress blowing up around her is a type of teasing sensuality,” Johnson once said. “There is something about her pose, the exuberance for life without inhibition, it expresses an uninhibited sense of our own vibrancy.”