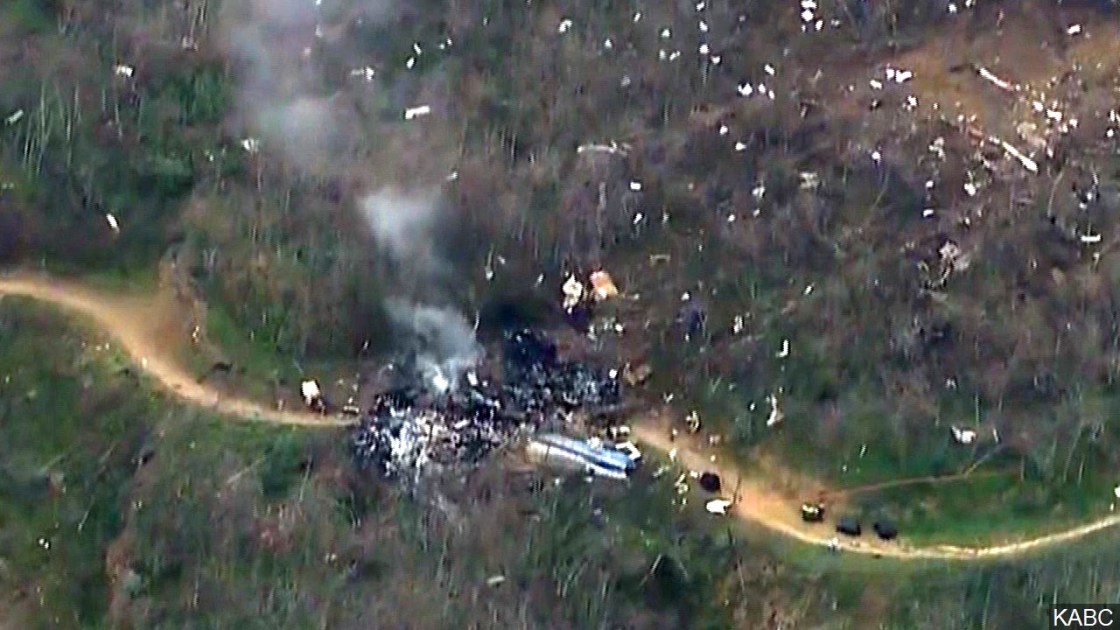 The pilot of the helicopter that crashed in Calabasas, killing Lakers legend Kobe Bryant, his 13-year-old daughter and seven others, became disoriented in heavy fog that left him unable to discern up from down, causing him to slam the copter in a hillside, federal investigators concluded Tuesday.

The National Transportation Safety Board concluded pilot error was the probable cause of the Jan. 26, 2020, crash, saying pilot Ara Zobayan believed he was ascending above the fog when he was actually descending at high speed. 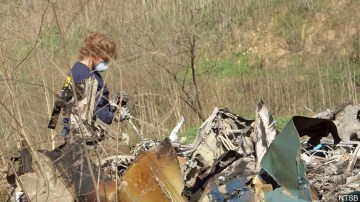 According to NTSB chief investigator Bill English, Zobayan told an air traffic controller, “he was climbing (to) 4,000 feet, however, by that time, the helicopter was in a tightening left turn and descending rapidly. This maneuver is consistent with the pilot experiencing spatial disorientation and limited visibility conditions.”

The NTSB findings were presented Tuesday morning after an investigation that lasted about one year. The report found no mechanical difficulties on the Sikorsky S-76B helicopter that would have contributed to the crash.

Zobayan was the chief pilot for the helicopter company Island Express, and had been flying in the area for 10 years. But investigators said the evidence indicated that he failed to strictly follow the aircraft’s instruments and his training, and he did not appear to have a backup plan in the event he couldn’t complete the flight.

Zobayan was ferrying Bryant and the other passengers from Orange County to Camarillo for a youth basketball game, in which the retired Laker would have coached his daughter’s team.

The NTSB has been recommending such a requirement for 15 years, but the Federal Aviation Administration requires only air ambulances to be outfitted with the system.

However, NTSB investigators said Tuesday that TAWS would not have prevented the Calabasas crash, since Zobayan was aware of the terrain.

“These devices are designed for a class of accidents we call controlled flight into terrain in which … the pilot is not aware of the terrain or they turned the wrong way or descendent below an altitude,” English said.

“… The pilot doesn’t know which way is up so this type of system would not aid in that situation. … While it’s great technology, we don’t think it applies here.”

The five-member board did recommend that so-called Safety Management Systems be required for all Part 135 flights — commercial, non-scheduled aircraft operations such as private air charter and air taxi flights. The FAA does not require SMS — a comprehensive system of assessing risk — for companies such as Island Express, but does encourage it.

“Although the company used SMS tools, it did not implement the entire program and performed safety assurance evaluation such as those that could have assured the effectiveness of the flight risk analysis,” the NTSB’s report said. “… Although the company had SMS, our investigation showed that they did not effectively develop and implement the entire program.”

The weather on the morning of the flight included a widespread area of coastal clouds about 1,000 to 2,000 feet thick “characterized by stratus clouds at the top at the potential for fog formation below. There were no hazardous conditions such as icing or thunderstorms,” English said.

The flight departed at 9:07 a.m. and proceeded northwest across the Los Angeles metropolitan area. At 9:20 a.m., Zobayan requested permission to enter air space over Burbank Airport but was advised to hold for traffic. About 11 minutes later he was provided clearance through the Burbank airspace, maintaining an altitude of about 500 feet above ground level.

As the flight proceeded west out of the San Fernando Valley, controllers advised Zobayan that his altitude level would be too low as the helicopter followed the Hollywood (101) Freeway toward an area of rising terrain. About four minutes later, Zobayan told controllers that he was intending to climb above the cloud layer.

The helicopter had been flying at about 350 feet above ground level, but during this transmission to controllers it began climbing at a rate of about 1,500 feet per minute while generally following the 101 and a slight left turn.

“During radio communications with ATC the helicopter climbed (about 1,300 feet above ground level) by which point it was highly unlikely for the pilot to be able to maintain visual ground contact,” investigators said.

“The controller asked the pilot’s intention and he said he was climbing 2,400 feet. However, by that time the helicopter was in a tightening left turn and descending rapidly,” English said. “This maneuver is consistent with the pilot experiencing spatial disorientation and limited visibility conditions.”

The final climb began 37 minutes into the flight, and the fatal crash occurred two minutes later.

At the time of Zobayan’s attempted ascent, Van Nuys Airport was the closest airport for a possible alternate landing, at roughly 10 to 12 miles behind him, or a few minutes of flying time.

But investigators said those conditions were not bad enough to indicate that the flight should have been canceled.

Another NTSB investigator who specializes in pilot training said Zobayan operated in a manner inconsistent with his training.

“During the climb and subsequent descent the pilot communicated with air traffic control on numerous occasions but did not declare an emergency. The excessive speed entering the cloud the rapid rate of decline and the left turn were inconsistent with his training,” he said.

An NTSB specialist in human performance issues said Zobayan should have relied on the flight instruments if he was losing his bearings.

Communication with air traffic control might have been a factor as well, he said.

“As the helicopter climbed, the air traffic controller asked the pilot to ident which required the pilot to move his hand to the center of the instrument panel and press a button. The pilot’s tasks associated with communicating with the controller and pushing the ident button introduced operational distractions from his primary task of monitoring the flight instruments. The resulted interruptions … would make him more vulnerable to misleading vestibular cues that could adversely affect his ability to effectively interpret the instruments and maintain control of the helicopter.”

English said later that no air traffic controller actions or errors contributed in any way to the crash.

The Sikorsky S-76B was not required to have a cockpit voice recorder. The helicopter was originally outfitted with a CVR, but a subsequent retrofitting removed the device, according to the NTSB.

Investigators found no indication that Island Express violated any laws in connection with the flight, and an NTSB investigator said he saw no reason to believe the company was an unsafe carrier. But the officials also faulted the company for “inadequate review and oversight with the safety management system.”

A representative for Island Express said the company would not have any comment on Tuesday’s report.

From 2010-19, the NTSB recorded 184 fatal aircraft accidents related to spatial disorientation, 20 of which were fatal helicopter accidents.

The board found that a pilot data monitoring program which can enable an operator to identify and mitigate factors that may influence deviations from established norms can be particularly beneficial for operators like Island Express that conduct single pilot operations and have little opportunity to directly observe pilots and the operational environment.

It also found that a CVR could have provided valuable information about the visual cues associated with the adverse weather and the pilot’s focus and attention in the cockpit.

“For the NTSB, this is just really the first step in our process of improving safety. After a board meeting, safety is not improved until we get our recommendations implemented,” board member Jennifer Homendy said.

The board’s recommendations included requiring the FAA to use simulation devices to provide scenario-based pilot training that addresses the decision-making, skills and procedures needed to recognize and respond to changing weather conditions in flight, apply mitigation strategies for avoiding adverse weather, and practice the transition to the use of flight instruments to reduce the risk of spatial disorientation.

“The NTSB’s findings reiterate the need to update existing helicopter safety regulations in order to keep passengers safe,” she said. “We still don’t know the exact cause of the crash partly due to the fact that the helicopter wasn’t equipped with a flight recorder, something the NTSB has recommended be required on all helicopters for nearly a quarter century.

“We must work to prevent tragic accidents like the 2020 crash that killed that killed nine passengers including Kobe and Gianna Bryant, and I believe requiring flight recorders and terrain awareness systems will make flights like these safer. The NTSB stood by its longstanding recommendations today and I urge the Senate to hold hearings on and mark up my bill making this safety equipment mandatory before more lives are lost.”

Among the board’s 13 official findings were that Zobayan likely was influenced by a self-induced pressure to please his high-profile client, and by “plan continuation bias,” which investigators said strengthens as the pilot gets closer to the destination.

“They had a good relationship with the client and likely did not want to disappoint them by not completing the flight,” investigators said. “This self-induced pressure can adversely affect pilot decision-making and judgment. However, there was no evidence that Island Express, air charter broker or the client placed pressure on the pilot to accept the charter flight request or complete the flight.”

Bryant and the other passengers were being flown to the former Laker’s Mamba Sports Academy in Thousand Oaks for a youth basketball game, with Bryant coaching his daughter’s team.

The crash has sparked an array of lawsuits filed by relatives of the crash victims, including Bryant’s widow, Vanessa.

Along with Bryant, 41, and his daughter, also killed in the crash were: