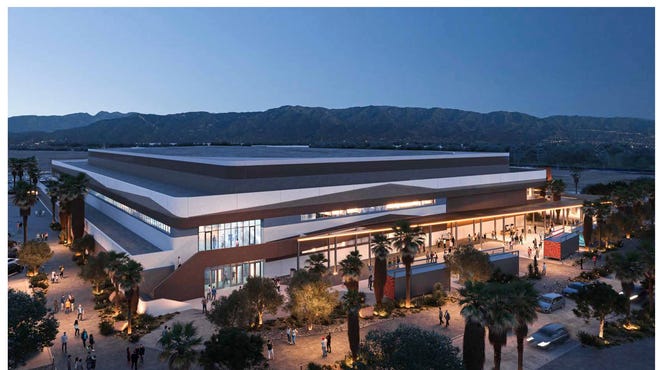 The Desert Sun partnered with Oak View Group, the company behind the soon-to-be-built Coachella valley sports and entertainment arena to disclose never before renderings in a virtual event.

This project is being called the Coachella valley arena and is on an ambitious timeline of 18 months to be completed.

“It really is a cool story for this arena, it’s a 10,000 seat arena, it’s midsize, it’s located just between Phoenix, LA, San Diego, so it’s really this confluence of all these different megacities. And the architecture of Palm Springs itself as everyone knows is a mid-century mecca.”

The informational webinar series featured the architectural team behind the design of the area, describing what sports and music fans can expect. Starting with location, the arena is set to be built just off interstate-10 off the cook street exit.

Robert Norvell is the principal architect from the Oak View Group and explains the size the arena will take up in the area.

“We’re directly south of the classic club golf course, sitting on roughly 40 acres of land here surrounded by 3,000 parking spots and you can see the arena in red.”

As far as size, the arena will be large enough to accommodate two ice rinks and when walking in, we’re told people will be quickly drawn in.

Norvell says that the community will also be involved with this project.

“The primary building and ice sheet where the main hl events will happen, but to the north of that we have a practice ice sheet and what we are calling a community ice sheet.”

Whitney Williams, the interior designer from the Oak View Group explains what the decor and interior format will look like.

“When you walk in you will know immediately, and then you walk down into your seats, if you have seats in the lower bowl, and so really upon entry you are already feeling as though you are apart of the game or the concert.”

And seating, depending on the type of event, the number of seas available  will vary, but generally, the arena will be able to accommodate a crowd of 10,000.

Groundbreaking for the arena is expected to happen in may with a goal of a completed arena sometime in the fourth quarter of 2022.