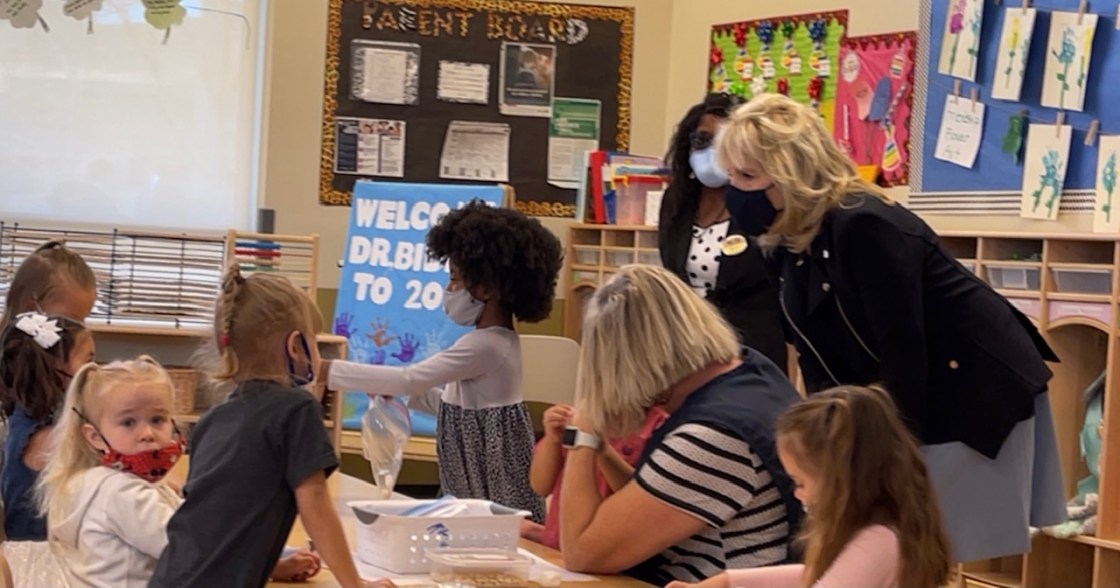 Her first stop on the base: the child development center. There two and three-year-olds anxiously awaited the First Lady.

She chatted with children who were excited to show off their latest creations.

From there, the Dr. Biden held a news conference to announce the relaunching of the joining forces initiative, that supports service members, veterans and their families. But she started celebrating the nearly two trillion dollar COVID relief bill was on its way to being signed by President Joe Biden.

“The American Rescue Plan passed and it was so Joe is going to be signing it on Friday and I know, I‘m so excited because I know what it’s going to mean for American families,” said Dr. Biden.

The First Lady has been on a listening tour with military families. They’ve been sharing their struggles that have gotten tougher during the pandemic.

“During the last year hearing so many parents have told me that they feel like they barely feel like they’re holding it together and they’re exhausted,” she says.

Armed with that knowledge she says she and the administration plan to change things for the better through the initiative she carried on since starting it in 2011 with  former First Lady Michelle Obama, “And just as important we want to know what’s working at places like Twentynine Palms.

As a military mom herself, this initiative is near and dear to her heart.

“Your commander in chief and I will continue to lift up your experience and rally to get you the support that you deserve,” she says.

This was the last stop for the first lady as she relaunches her initiative to support military families she says if service members are worried about their families they can’t be at their best, “And that’s why this isn’t just a nice thing to do it’s a national security imperative.