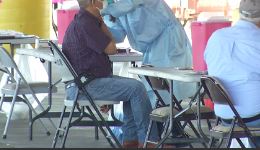 “I was just outraged about the whole thing,” says Josef Schreick, in disbelief over the issues he’s been having as he tries to get his second COIVD vaccine dose.

He’s past due for his second dose of the Pfizer COVID vaccine. He says he never got and email or any alert to book his appointment.

“I was getting a little anxious,” he says.

But on Wednesday the county reached out to ask if he received an email to schedule his second dose, come to find out he’s not alone.

The other company is Curative. A couple of weeks ago they took over some of the county vaccination sites including the one in Indio, where Josef got his first dose. He says he was told to call the Curative number to schedule his second dose. He did. He says after 20 minutes he got an appointment, over an one hour away in Moreno Valley because the valley had no Pfizer doses at their sites.

He has Guillain-Barre syndrome and that drive like for many with underlying health conditions is not a good idea.

“In fact yesterday I was very, very sick from it, I could barely walk and I couldn’t use my right hand,” he says adding he can’t imagine others who are elderly having to make that drive.

We reached out to the county to ask about the transition issues.

“One of the challenges was the second dose situation where people were needed doses at 21 or 28 days and needed to get signed up,” says Michael Osur, the asst. county health director for the Riverside County Department of Public Health adding they’re sorting the issues out.

Osur says they are now making sure valley residents have access to the brand of vaccine they need, “You have some vaccine and not other vaccine at the same time so we decided to the Indio site will always have Moderna and the Palm Springs site has Pfizer.”

But he says often when people call they are given the earlier appointment and often sites in Moreno Valley that are larger have more availability.

But appointments are easier to come by online as they have been getting double the doses and have added more people to answer phones and emails.

Osur urges anyone who has not been emailed they should not wait and should try to get an appointment, “Meanwhile anyone who’s reached their timeline of 21 days for Pfizer, 28 days for Moderna can sign themselves up individually and not wait for an invite.”

But he says if for some reason you miss your hard deadline of 21 or 28 days don’t worry, “We are assured by the Centers for Disease Control in Atlanta that giving the second dose up to 43 days after the first dose is just fine and just as effective.”

And more importantly you must make sure you do get the same brand as your first dose because there have not been studies done to see if mixing brands is safe or effective.

“We have no idea if that could work or not and we highly recommend against that,” says Osur.

Osur says they’re getting better everyday and have overcome a lot going from zero to over 740,000 doses administered in three months and will continue to expand sites making more appointments available.

If you have not received an email call: 888-702-9042 or email Rivco.vaccine.ruhealth.org to schedule your appointment and you can also log on to their website click here: RIVCO VACCINE

We did reach out to Curative to ask about the issues, they said they would look into it and did not get back to us.

Josef says he wanted to share his experience in hopes he could help others going through the same issue.