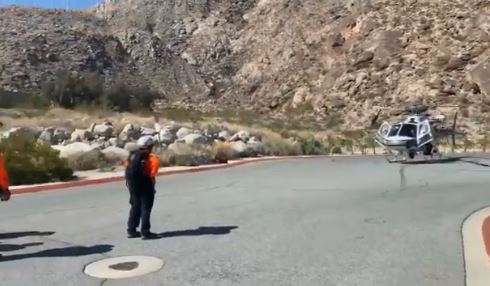 Search and rescue crews are assisting an injured hiker who told authorities he had been stranded on a Palm Springs trail hillside for several days Thursday morning.

The Palm Springs Fire Department responded to a call around 8:12 a.m.

The injured hiker, who says to have been there for three to five days, was calling out to a hiker passing by the area when he was found.

A helicopter crew was sent to rescue the man and were on scene by 10:43 a.m.

According to a tweet sent out by the department, the hiker is in “a very difficult area to get to” in the Tahquitz Falls area.

ALERT- PSFD is currently on the scene of a hiker rescue in the Tahquitz Falls area with PSPD, Search and rescue, CHP H-60 and AMR. The victim os in a very difficult area to get to and personnel are being flown in by helicopter to evaluate, treat and prepare him for evacuation pic.twitter.com/Ay51DUqs8o

The hiker was administered treatment at the scene and transported to an area hospital.

The injuries were described as minor, according to officials.