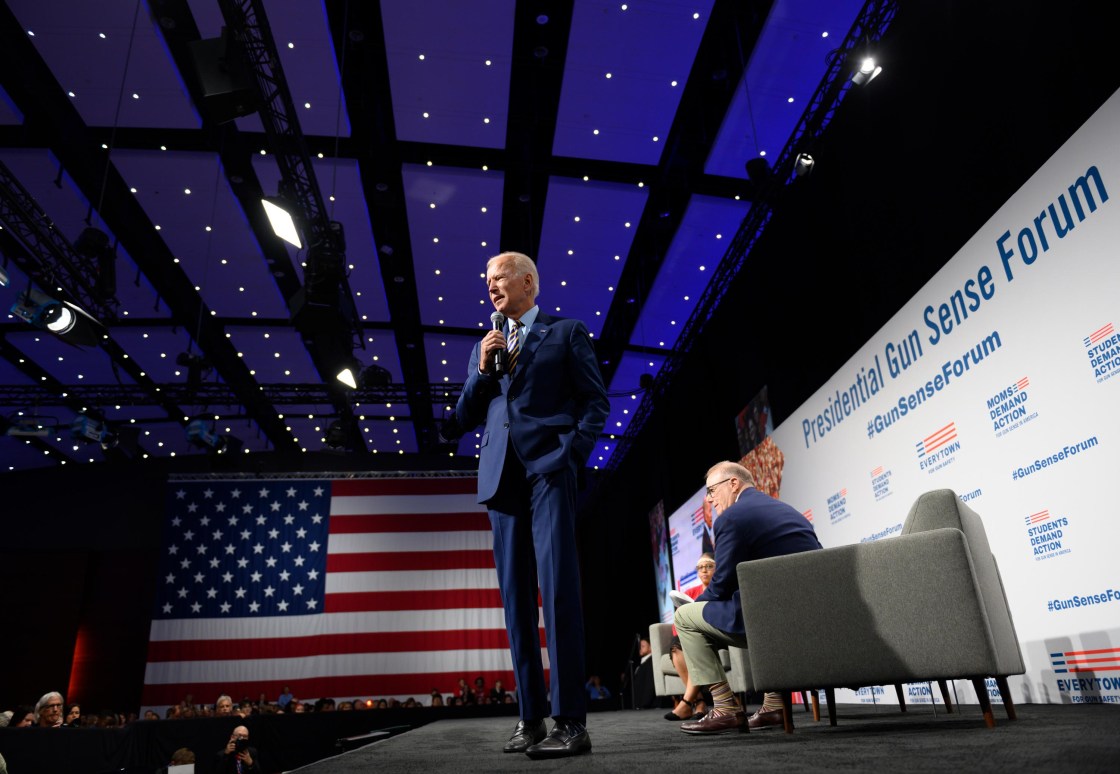 Facing pressure to act after a recent spate of high-profile mass shootings, President Joe Biden unveiled a package of moves Thursday that seek to address a scourge of gun violence he deemed a “blemish on the nation.”

“Gun violence in this country is an epidemic,” Biden said in the Rose Garden to an audience of lawmakers and Americans touched by gun violence. “And it’s an international embarrassment.”

The executive actions — which Biden repeatedly argued did nothing to impinge on the Second Amendment right to bear arms — include efforts to restrict weapons known as “ghost guns” that can be built using parts and instructions purchased online.

The moves are limited in scope and fall short of the steps Biden has vowed to pressure Congress to take. Still, they fulfilled his pledge last month to take “common-sense” steps on his own, and one move — more heavily regulating arm braces used to make firing a pistol more accurate — directly relates to the March shooting in Boulder, Colorado, where such a device was used. They took on new urgency coming on a day when the country experienced two more mass shootings, this time in Bryan, Texas, and Rock Hill, South Carolina.

He also announced that he is nominating gun control advocate David Chipman to lead the Bureau of Alcohol, Tobacco, Firearms and Explosives, which hasn’t had a permanent director in place since 2015.

Biden emphasized the announcements only amount to the first steps toward addressing gun violence, with later action — like a ban on assault weapons or rules requiring universal background checks — requiring Congress. Biden, who is in the midst of advancing a massive infrastructure plan, has previously voiced uncertainty on the likelihood of passing major new gun laws.

On Thursday, he acknowledged the persistent struggle in convincing Washington to act on a seemingly intractable issue.

But he insisted lawmakers must break the pattern.

“They’ve offered plenty of thoughts and prayers, members of Congress, but they have passed not a single new federal law to reduce gun violence,” he said. “Enough prayers, time for some action.”

As the nation’s posture on guns has evolved, Biden has been front-and-center at most every stop along the way for more than three decades, from the triumph of a 10-year ban on assault weapons in 1994 to the disappointment of a failed push for universal background checks in the wake of the 2012 Sandy Hook massacre.

Recent shootings in Georgia and Colorado had raised the question inside the West Wing over how much political capital Biden should expend on the matter, which has so often ended in frustration. Like former President Barack Obama, Biden has determined that executive actions are a more viable vehicle for progress given a narrowly divided Congress and a slate of other pressing priorities.

Biden said stripping gun manufacturers of liability protection would be at the top of his list of legislative priorities on gun control.

“The only industry in America, a billion dollar industry, that can’t be sued,” he said. “Imagine how different it would be if that same exemption had been available to tobacco companies?”

The item was one in a list of actions Biden said Congress must take to combat gun violence. But he said it could potentially have an outsized effect.

“If I get one thing on my list, the Lord came down and said, ‘Joe you get one of these, give me that one,’ ” he said. “I’ll tell you what, there would be a come to the Lord moment these folks would have real quickly.”

“While the president’s executive actions are critical, they are not a substitute for meaningful legislation to address the gun violence epidemic. The American people are demanding action from Congress, and I’ve committed to hold votes on the floor of the United States Senate on gun violence prevention legislation,” he said in a statement. “I also look forward to the Senate quickly processing and confirming the president’s superbly-qualified nominee to head the ATF.”

The ATF position often becomes embroiled in the fraught politics of gun control. Chipman is a former ATF agent who serves as senior policy adviser at Giffords, the organization led by former congresswoman Gabby Giffords, who became a gun control advocate after being shot in 2011.

Ghost guns are handmade or self-assembled firearms that don’t have serial numbers. Some can be fabricated in as little as 30 minutes using kits and parts purchased online. Biden directed the Justice Department to issue a proposed rule to “stop the proliferation” of those weapons, though a senior administration official previewing the step declined to elaborate on how specifically the rule — due in 30 days — might work.

Another proposed rule would target stabilizing braces for pistols, which aid in the weapons’ accuracy and manage recoil. Under the new rule, the devices — which the senior administration official contended turn pistols into short barreled rifles — would be covered by regulations in the National Firearms Act, including requiring registration. Last month’s mass shooter in Boulder, Colorado, used a pistol modified with an arm brace, according to a law enforcement source.

Biden also announced new investments in intervention programs in violence-prone communities; a directive to the Justice Department to publish model “red flag” laws for states that allow the temporary removal of guns from people deemed at high risk of harming themselves or others; and a comprehensive report on firearms trafficking.

That included meeting with some of those groups and fielding ideas for steps Biden could take on his own. Some advocates had been clamoring for steps earlier in the administration, pointing to Biden’s pledge to prioritize gun control during his campaign.

Biden made the announcements Thursday from the Rose Garden alongside his attorney general, Merrick Garland, whose Justice Department will be responsible for drafting the proposed rules.

“We stand here today not at a moment of tragedy, but in the midst of an enduring tragedy,” Garland said, detailing some of the steps he was tasked with undertaking, including efforts to measure gun trafficking “in a data-driven way” with an updated study from the ATF that will evaluate weapons from 3D printers and other new technology.

This story has been updated with details from the Rose Garden announcement.