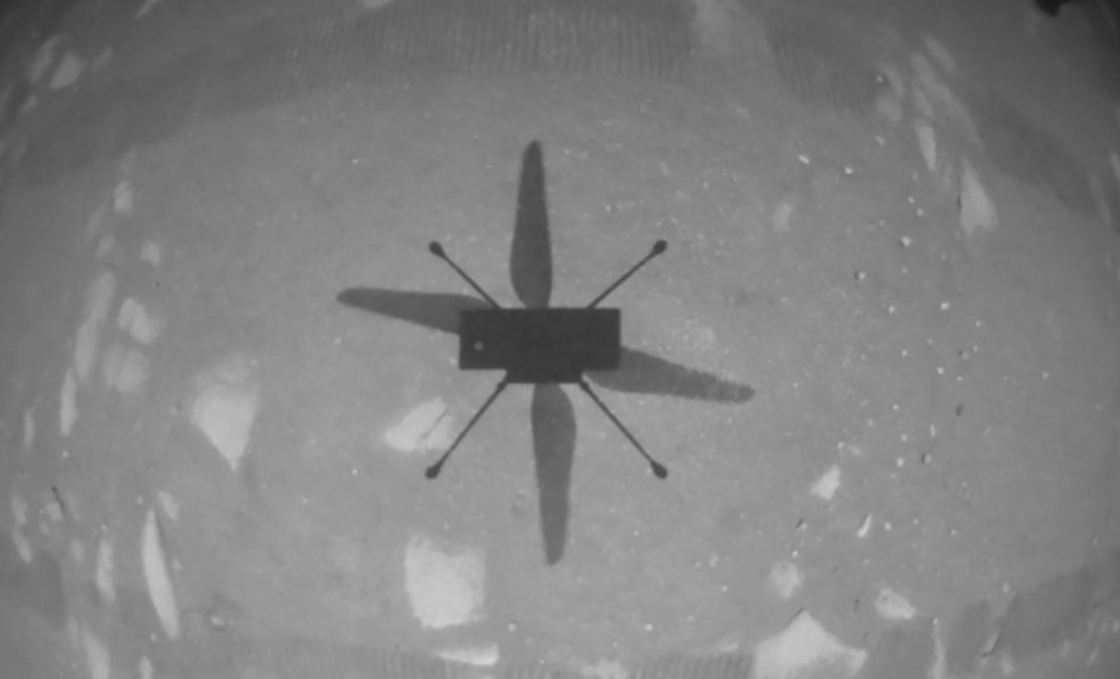 The Ingenuity helicopter, designed and built at NASA’s Jet Propulsion Laboratory in Pasadena, successfully completed a brief but historic flight above the surface of Mars early Monday.

After being delayed by a technical issue last week, the tiny, solar- powered four-pound helicopter became the first aircraft in history to make a powered, controlled flight on another planet.

The Ingenuity team at the JPL confirmed the flight’s succees after receiving data from the helicopter via NASA’s Perseverance Mars rover at 3:46 a.m. PT, according to a JPL statement.

“Ingenuity has performed its first flight — the first flight of a powered aircraft on another planet!” NASA tweeted just after success was confirmed —  as data from the helicopter arrived at the JPL from more than 100 million miles away.

It happened. Today our #MarsHelicopter proved that powered, controlled flight from the surface of another planet is possible. It takes a little ingenuity, perseverance, and spirit to make that opportunity a reality: https://t.co/oT3rrBm6wj pic.twitter.com/u63GKshp0G

With flight controllers cheering, the JPL also tweeted, “Perseverance got us to Mars. With Ingenuity, we soar higher.”

The helicopter was carried to Mars attached to the belly of the Perseverance rover, which trained its cameras on Ingenuity to record the helicopter’s flight.

Shortly before 4 a.m. PT, Ingenuity transmitted a still photo back to earth, showing its spindly shadow above the surface.

A few moments later, Perseverance’s camera transmitted a jumpy video showing the brief flight of the tiny helicopter, which achieved an elevation of about 10 feet (3 meters) before returning safely to the surface. The flight lasted just over 39 seconds.

“The X-15 was a pathfinder for the space shuttle. Mars Pathfinder and its Sojourner rover did the same for three generations of Mars rovers. We don’t know exactly where Ingenuity will lead us, but today’s results indicate the sky — at least on Mars — may not be the limit.”

The JPL said Ingenuity first became airborne at 12:34 a.m. PT. The three-hour delay in confirming its success was attributed to the great distance that data had to travel from Mars to the earth.

“Altimeter data indicate Ingenuity climbed to its prescribed maximum altitude of 10 feet (3 meters) and maintained a stable hover for 30 seconds,” the JPL said.

“It then descended, touching back down on the surface of Mars after logging a total of 39.1 seconds of flight. Additional details on the test are expected in upcoming downlinks.”

Ingenuity’s flight was autonomous — meaning it was piloted by onboard guidance, navigation and control systems running algorithms developed at JPL.

Because data must be sent to and returned from the Red Planet over hundreds of millions of miles using orbiting satellites and NASA’s Deep Space Network, Ingenuity cannot be flown with a joystick, and its flight was not observable from Earth in real time, the JPL said.

“Now, 117 years after the Wright brothers succeeded in making the first flight on our planet, NASA’s Ingenuity helicopter has succeeded in performing this amazing feat on another world,” said Thomas Zurbuchen, NASA’s associate administrator for science.

“While these two iconic moments in aviation history may be separated by time and 173 million miles of space, they now will forever be linked. As an homage to the two innovative bicycle makers from Dayton, this first of many airfields on other worlds will now be known as Wright Brothers Field, in recognition of the ingenuity and innovation that continue to propel exploration.”

One of the big questions answered by the flight was whether a helicopter could fly in Mars’ thin atmosphere.

“This first flight was full of unknowns,” the JPL statement said. “The Red Planet has a significantly lower gravity — one-third that of Earth’s — and an extremely thin atmosphere with only 1% the pressure at the surface compared to our planet.

“This means there are relatively few air molecules with which Ingenuity’s two 4-foot-wide (1.2-meter-wide) rotor blades can interact to achieve flight. The helicopter contains unique components, as well as off-the- shelf-commercial parts — many from the smartphone industry — that were tested in deep space for the first time with this mission.

Said Michael Watkins, director of JPL: “The Mars helicopter project has gone from ‘blue sky’ feasibility study to workable engineering concept to achieving the first flight on another world in a little over six years. That this project has achieved such a historic first is testimony to the innovation and doggedness of our team here at JPL, as well as at NASA’s Langley and Ames Research Centers, and our industry partners. It’s a shining example of the kind of technology push that thrives at JPL and fits well with NASA’s exploration goals.”

NASA officials had targeted Monday for the flight after it was postponed last weekend due to a technical problem.

Ingenuity had been set to make its historic first flight on April 11, but the mission was delayed due to an issue that occurred during a test spin of its rotors.

“During the high-speed spin test, the sequence ended early during the transition from `preflight’ to `flight’ mode,” mission managers tweeted at the time. “The helicopter is safe & healthy. The team is diagnosing the issue.”

On April 12, the helicopter management team “identified a software solution” for the problem, according to NASA.

“Over the weekend, the team considered and tested multiple potential solutions to this issue, concluding that minor modification and reinstallation of Ingenuity’s flight control software is the most robust path forward,” according to a NASA blog post. “This software update will modify the process by which the two flight controllers boot up, allowing the hardware and software to safely transition to the flight state.”

The software update was tested at JPL earlier this past week. NASA officials had said validating the software and then uplinking it to the helicopter would take some time.