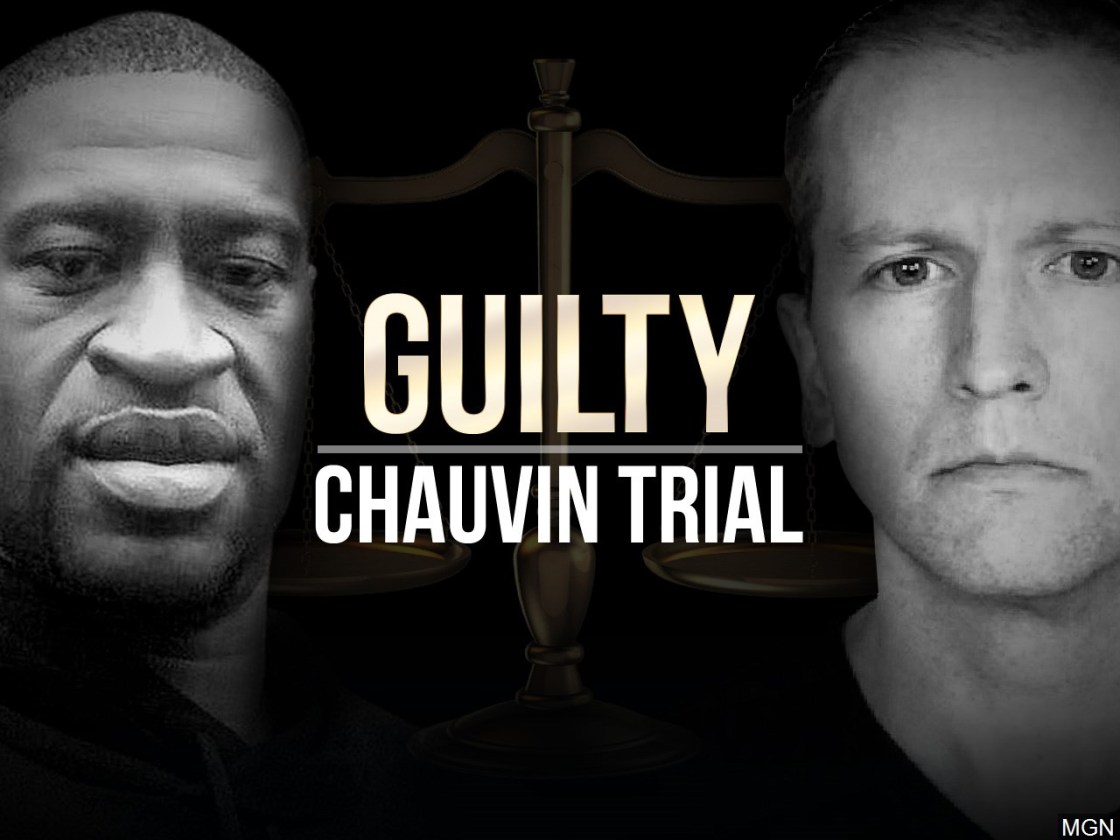 Former Minneapolis Police Officer Derek Chauvin was convicted Tuesday on charges of murder and manslaughter in the death of George Floyd.

The jury of five men and seven women deliberated for four hours Monday afternoon and resumed deliberating Tuesday morning, according to the court. They were sequestered from the public during deliberations.

The deliberations began after three weeks of testimony in one of the most closely watched cases of the Black Lives Matter era. The prosecution’s case against Chauvin featured 38 witnesses as they sought to show the former Minneapolis Police officer committed murder when he kneeled on the neck and back of Floyd, handcuffed and prone on the street, for 9 minutes and 29 seconds on May 25, 2020.

Prosecutors have repeatedly told jurors to “believe your eyes” and rely on the infamous bystander video of Floyd’s death.

“This case is exactly what you thought when you saw it first, when you saw that video. It is exactly that. You can believe your eyes,” prosecuting attorney Steve Schleicher said in closing arguments. “This wasn’t policing. This was murder.”

The defense called seven witnesses of its own — but not Chauvin himself, as he invoked his Fifth Amendment right not to testify.

Defense attorney Eric Nelson argued that Chauvin’s use of force was unattractive but appropriate and said he was distracted by a crowd of hostile bystanders on the scene. He also argued that Floyd died due to fentanyl and methamphetamine use, his resistance of officers and his underlying heart problems, rather than due to Chauvin’s actions.

The actual sentences would likely be much lower, though, because Chauvin has no prior convictions. Minnesota’s sentencing guidelines recommend about 12.5 years in prison for each murder charge and about four years for the manslaughter charge.

Six of the jurors are White, four are Black and two are multiracial, according to information released by the court.

A nation waits on edge

Floyd’s death last May set off unrest and mass protests challenging the ways that police treat Black people in the US. In a first for Minnesota, the trial has been broadcast live in its entirety to accommodate Covid-19 attendance restrictions, giving the public a rare look into the heart of the legal system.

Though the trial has focused specifically on Chauvin and Floyd, the stakes of the case were made clear last week when a police officer in nearby Brooklyn Center was charged with manslaughter after she fatally shot a 20-year-old Black man during a traffic stop.

Tensions are high throughout the Twin Cities region, and authorities have ramped up security in anticipation of a verdict. The Hennepin County Government Center has been surrounded by fencing and barricades since jury selection began in March.

More than 3,000 Minnesota National Guard members have also been activated in the Twin Cities, while businesses in Minneapolis have boarded up windows.

President Joe Biden on Tuesday said he is praying for the “right” verdict in the case, noting that the evidence is, in his view, “overwhelming.” He also said he spoke with Floyd’s family on Monday.

“They’re a good family, and they’re calling for peace and tranquility, no matter what that verdict is,” he told reporters in the Oval Office.

In the prosecution’s first phase of the trial, video from the scene and bystanders’ testimony revealed Floyd gasping for air and saying “I can’t breathe” 27 times under Chauvin’s restraint. Next, a series of police supervisors and use-of-force experts — including Minneapolis Police Chief Medaria Arradondo — criticized Chauvin’s continued kneeling as excessive and unreasonable, particularly after Floyd had passed out, stopped breathing and had no pulse.

Finally, five separate medical experts explained that Floyd died from a lack of oxygen when Chauvin restricted his ability to breathe in what’s known as “positional asphyxia.”

In the state’s closing argument, Schleicher said Chauvin kneeled on Floyd for so long because of his pride and his ego in the face of concerned bystanders.

“He was not going to let these bystanders tell him what to do. He was going to do what he wanted, how he wanted, for as long as he wanted. And there was nothing, nothing they can do about it because he had the authority. He had the power, and the other officers, the bystanders were powerless,” he said. “He was trying to win, and George Floyd paid for it with his life.”

He contrasted Chauvin’s “ego-based pride” with the proper feelings of pride in wearing a police badge and praised policing as a noble profession. He insisted the state was prosecuting Chauvin individually — not policing in general.

In response, Nelson said Chauvin acted as a “reasonable officer” would in that situation and said there was no evidence he intentionally or purposefully used force that was unlawful.

“You have to look at it from the reasonable police officer standard. You have to take into account that officers are human beings, capable of making mistakes in highly stressful situations,” Nelson said. “In this case, the totality of the circumstances that were known to a reasonable police officer in the precise moment the force was used demonstrates that this was an authorized use of force, as unattractive as it may be. This is reasonable doubt.”