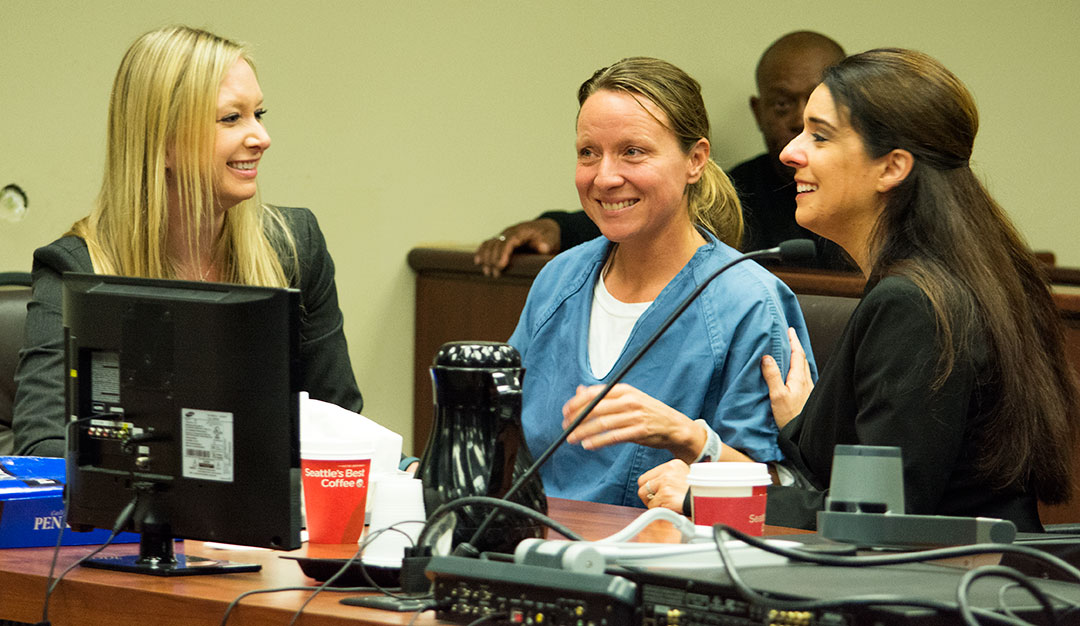 Prosecutors announced Thursday they will not retry a Corona nurse who was found guilty 15 years ago of the bludgeoning death of her live-in boyfriend but whose conviction was later invalidated by a judge who cited ineffective defense counsel, resulting in her release from state prison.

Kimberly Louise Long, 45, was represented by the nonprofit California Innocence Project, whose attorneys argued against a retrial in a recent presentation to Riverside County District Attorney Mike Hestrin and his staff.

DA’s Office spokesman John Hall said the interactive presentation, as well as a re-investigation of the case by the agency’s Bureau of Investigation Cold Case Unit and the fact that some of the witnesses have died, culminated in the decision not to retry the defendant for second-degree murder.

“Only after all these efforts were exhausted did we make the decision not to pursue a trial,” according to an agency statement. “It is the ethical duty and responsibility of the DA’s Office to only file and try cases which we believe we can prove to a jury beyond a reasonable doubt.”

Long expressed elation over the announcement, saying she was relieved to put “this case behind me and move on with my life.”

“It’s been hanging over my head for so long, but now I am just looking to the future,” she said.

California Innocence Project Director Justin Brooks thanked the prosecution, adding, “Considering the evidence in this case, it was the right decision.”

In December 2005, Long was found guilty in the 2003 killing of 31-year- old Oswaldo “Ozzy” Conde of Corona, who was slain in the Springbrook Street home he and the defendant shared.

Long was tried twice, the first resulting in a hung jury. In her second trial, she was convicted and sentenced to 15 years to life in prison.

Superior Court Judge Patrick Magers presided in both trials, and it was he who acceded to a 2016 defense Habeas Corpus petition arguing that the defendant was entitled to a retrial based on ineffective assistance of counsel by her prior attorney, Deputy Public Defender Eric Keen, who is now a Superior Court judge at the Riverside Family Court.

Magers ordered Long out of prison and back in county jail, where she was able to post bond, regaining her freedom while her case proceeded through a series of appeals.

In May 2018, a California state appellate court sided with the DA’s office and reversed Magers’ ruling, determining the judge’s rationale was without merit and Long’s conviction should stand. However, last November, the California Supreme Court reversed the lower court decision, setting the stage for a retrial, which prosecutors decided against pursuing.

In 2016, Brooks characterized the prosecution’s evidence as “paper thin when it went to trial” and suggested that Keen was too overworked to sufficiently dig into the case and point out the government’s weaknesses.

According to Brooks, in 2012, the defense requested DNA testing on evidence collected at the scene of the murder, resulting in indications that an “unknown male” was present and possibly involved in the attack.

The defense further insisted that the timeline of events on the night of the slaying upended the prosecution’s theory of how it was carried out, and that “it would have been impossible for Long to commit the murder and not get blood all over her clothes.”

According to Corona police investigators, in the predawn hours of Oct. 6, 2003, Conde was sitting on a living room couch, possibly sleeping, when he was struck multiple times in the head with an unidentified object.

Long maintained that she had been out that night and only discovered what happened after returning home, at which point she called 911.

Prosecutors cast doubt on that statement during her trial, noting that evidence pointed to her calling police more than 40 minutes after arriving home. The defendant told detectives she had trouble remembering all the details of what transpired because she was drunk.

According to witnesses, earlier that night, the mother of two had gotten into a heated argument with Conde, calling him a “loser,” punching him and ordering him out of her house for not paying his share of the bills. She then left to go to a friend’s place.

Prosecutors said Long could have provided aid to the victim because she was an emergency room nurse. The defendant testified she was too upset to try.

The California Innocence Project, a clinic run out of the California Western School of Law, relied on a taxpayer-funded grant from the California Office of Emergency Services to have the DNA testing done in Long’s case. According to the project, it receives 1,500 claims annually from inmates seeking to have their cases reviewed.