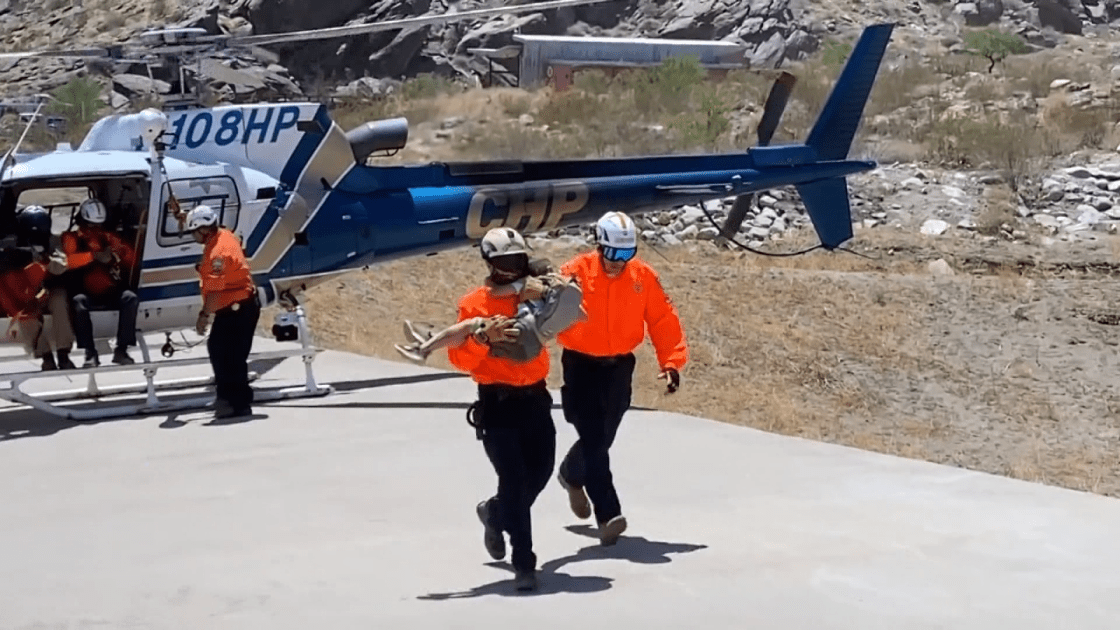 To donate to this non profit organization made up of all volunteers click here: HEROES

A member of Palm Springs Mounted Police Search and Rescue team cradles a little boy as he rushes him to a nearby ambulance. The four-year-old was bitten by a rattle snake on a Palm Springs hiking trail.

“When you hear that four-year-old your heart just starts pounding and everybody said, ‘let’s go’,” says Doug Stevens, a veteran rescuer and leader of the team says this was a first, “in the 40 years I’ve done this this is the first snake bite I’ve ever been on.”

And as luck would have it, they were training nearby with the CHP helicopter and were about to break for lunch when the heard the call over the radio.

“We knew that the location was about a 30 to 45 minute hike to get to them so we had the helicopter all morning, so we went right in our mode of rescue and we flew in and were there in five minutes,” says Stevens.

A rescuer was hoisted down and they had everything at the ready to just swoop in and hand him off to paramedics.

“We had a landing zone already set up so we were able to fly in, extricate him get him to the landing zone we had AMR right there, he was doing well so they were code 3 to the hospital,” says Stevens.

The hub where almost all snake bite victims in the region are rushed to especially children is Loma Linda University Health, a level one trauma center and where they have experts in snake venom and experienced doctors treating snake bites.

“Giving the anti venom is important and it’s important to do it quickly,” says Dr. Lance Brown, the vice chair of emergency medicine at LLUH
adding that when it comes to snake bites, time is critical.

“A child gets more venom per kilogram of body weight than an adult would so they’re more serious for your average bite … this is something that can progress very severe illness in a matter of hours,” says Dr. Brown adding that the only action to take with a snake bite is getting to treatment quickly.

“Sucking venom is a great scene for a movie but it’s not good medical care, don’t cut it, don’t suck on it, don’t put a tourniquet above it, get to medical care,” says Dr. Brown.

Dr. Brown says the all volunteer rescue team and first responders did everything right.

Stevens credits the whole team’s dedication and their partners like the CHP, AMR, and the fire department.

And while some may think it was luck they were training nearby Stevens says, “I don’t know if I want to call it luck,  call it more of a blessing, I think God watches over us, they were definitely watching over that little boy.”

Stevens says there are a lot of snakes on the trails this time of year and they come out to drink and hunt when it’s cooler. He says people need to be very careful where they’re walking and stay on the trails.

The Palm Springs Mounted Police Search and Rescue are a team of all volunteers who rely on donations for their training and equipment to do this important life saving work. To donate to this non profit organization made up of all volunteers click here: HEROES