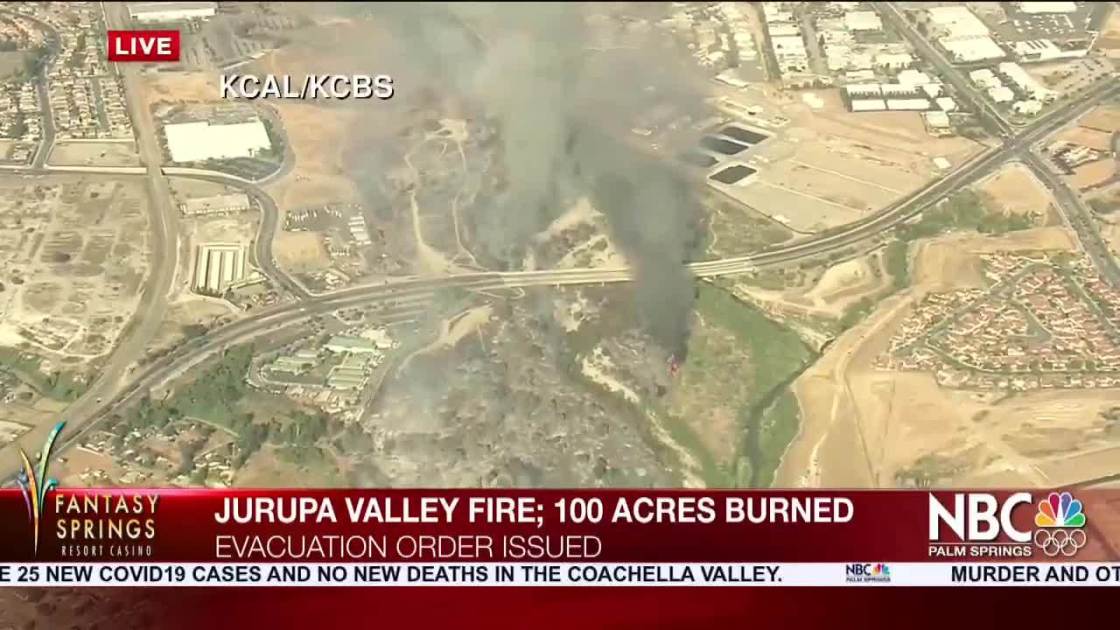 A brush fire that erupted in the Santa Ana River bottom between Jurupa Valley and Riverside has scorched 105 acres and was 85% contained Wednesday morning.

Crews were expected to be on the fire lines overnight, sealing gaps and mopping up.

The non-injury blaze started about 11:10 a.m. Monday in the area of Jurupa Avenue and Van Buren Boulevard, less than a mile north of Riverside Municipal Airport, according to the Riverside County Fire Department.

Firefighters had been making steady progress encircling the fire when a separate fire sprang up about 3:30 p.m. ahead of the larger one, near the Western Riverside County Animal Shelter.

The fires blended into one under increasing southwesterly winds, shifting directions throughout the day and threatening hundreds of homes in Jurupa Valley and Riverside, where mandatory evacuation orders were in place for several hours.

All orders were lifted overnight.

A battalion chief at the scene Monday afternoon described the winds as “erratic,” hampering containment efforts. However, winds died down within a few hours.

Riverside Municipal Airport and Flabob Airport, three miles to the northeast, were shut down Monday evening, and temporary flight restrictions were imposed, permitting only Cal Fire aircraft to come and go in the airspace.

Four Cal Fire water-dropping helicopters and two air tankers were called in to make runs on the fire.

No injuries were reported, and no structures were damaged.

The river bottom is dotted with homeless encampments, and during dry periods fires from camping and cooking are a regular occurrence.