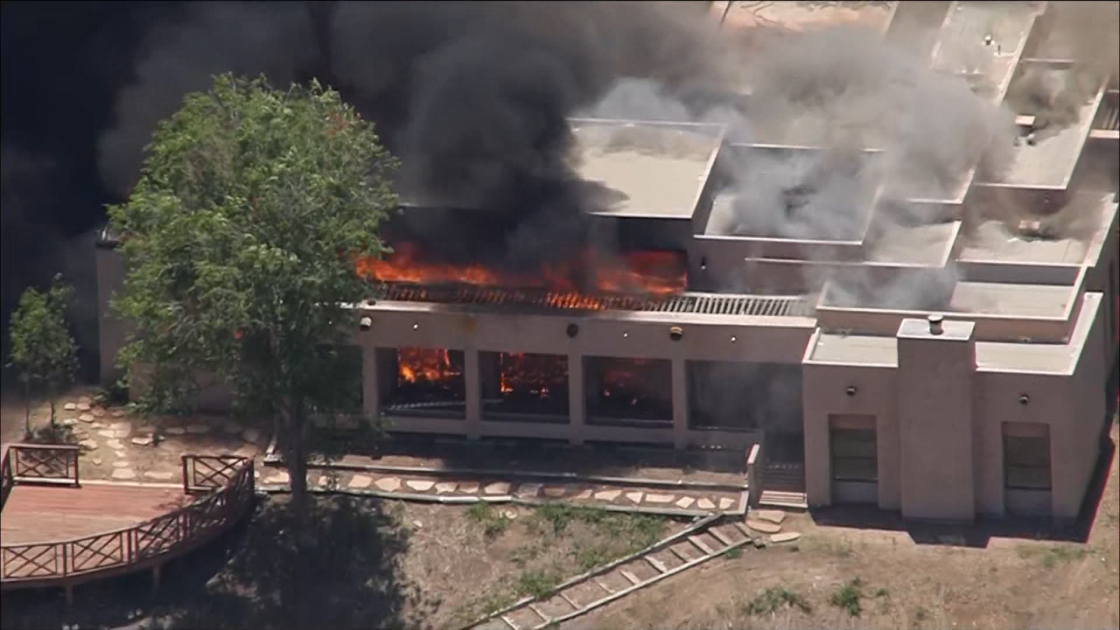 A Los Angeles County firefighter was killed and a fire captain was wounded inside an Agua Dulce fire station Tuesday, in a shooting carried out by one of their off-duty colleagues who later barricaded himself inside his home, set it ablaze and fatally shot himself in the backyard.

The shooting occurred at about 10:55 a.m. at Fire Station 81 in the 8700 block of Sierra Highway, Los Angeles County Fire Department Chief Daryl Osby said. The 44-year-old firefighter who died was shot multiple times in the upper body and was pronounced dead at the scene, authorities said. The fire captain, 54, suffered multiple gunshot wounds and was taken to Henry Mayor Newhall Hospital, where he was listed in critical but stable condition.

Neither of the men were immediately identified.

“I stand here with a heavy heart,” Osby said at a mid-afternoon news conference. “Today is truly a sad day and a tragic day for the Los Angeles County Fire Department. And I stand here from the perspective that you see other people do, but I just never thought it would be me or our fire department family that would suffer this type of loss.

“… I recognize and we all recognize that the work that our firefighters and our firefighter-paramedics do is a dangerous and arduous profession. And many times they put their lives in danger to protect and serve others when they receive 911 calls for service. But yet, as a fire chief, I never thought that when our firefighters face danger that they would face that danger in one of our community fire stations.”

The gunman was identified as an off-duty county firefighter who also worked at Fire Station 81.

According to sheriff’s Lt. Brandon Dean, witnesses to the shooting were quickly able to identify the gunman and his vehicle to responding deputies, who tracked him to his home in the 2600 block of Bent Spur Drive in Acton. Authorities said the suspect barricaded himself inside the home and set it on fire.

Uncertain of the gunman’s status, fire crews were unable to respond to the blaze, and the flames chewed through the sprawling home. As the fire raged, sheriff’s crews spotted a man in the backyard of the home with an apparent self-inflicted gunshot wound to the head. The body was seen in a seated, slumped-over position inside an empty swimming pool.

Fire department crews eventually were able to douse the flames from the air, making a series of water drops. That eventually allowed sheriff’s deputies to access the property and confirm the person seen in the pool was dead.

Dean initially told reporters that deputies were confident the person found was the gunman, but they could not say 100% until they were able fully access the property. A short time later, a county fire department public information officer confirmed to reporters outside the home that the body was the suspect being sought.

There was no immediate word on a motive for the shooting. Osby said only that the gunman was a firefighter-engineer, but he would not say if he was facing any internal disciplinary action that might have precipitated the gunfire.

The deadly shooting rocked the fire department, and left Osby at times fighting to maintain his composure as he reported the details.

“This morning when I received the news, it was some of the worst news that I’ve heard in my career,” Osby said. “And as a fire chief, I’ve dealt with a lot of death and a lot of fallen members of my department. And I’ve always prayed that we would never have a line-of-duty death. I never thought that if it occurred that it would occur in this fashion.

Osby said the firefighter who died had been with the department for more than 20 years and was a career firefighter, starting in a U.S. Forest Service Explorer Program. He described him as “truly dedicated, one of our better firefighters, amazing, and a true loss to our department.”

Los Angeles County Supervisor Hilda Solis, who chairs the Board of Supervisors, wrote on Twitter, “My most sincerest condolences to the family of the firefighter who was tragically killed in today’s shooting at Fire Station 81 in Agua Dulce,” Solis wrote on Twitter. “My thoughts are with our @LACOFD family. At my direction, flags will be flown half-staff at all County buildings.”

“The work our firefighters do is dangerous,” she wrote on Twitter. “They go to work every day knowing they may be asked to put their lives on the line to protect others. Between emergency calls, the fire station must have felt like their safe haven. Unfortunately that sense of safety has now been shattered.

“But I know, in spite of the violence today in Agua Dulce, our LA County firefighters will continue their unwavering commitment to protecting the rest of us and we thank them for that.”

This article has been updated with new information