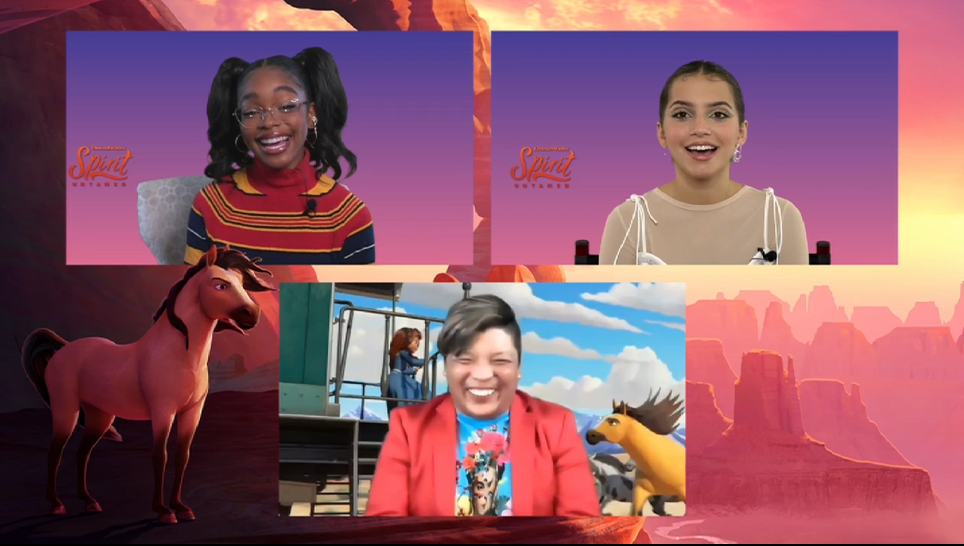 I love “Spirit Untamed,” it’s a visual feast of a film featuring brave girls and their magnificent horses.  Here’s the film’s official synopsis from Dreamworks/Universal:

“Lucky Prescott was never aware that her late mother, Milagro Navarro, was a fearless horse-riding stunt performer from Miradero, a small rural town on the edge of the wide-open frontier. Like her mother, Lucky does not enjoy rules and restrictions, which has caused her Aunt Cora to worry for her. Lucky had grown up in an East Coast city under Cora’s watchful eye, but when Lucky presses her own luck with one too many risky escapades, Cora picks up stakes and moves them both back with Lucky’s father, Jim, in Miradero. Lucky is decidedly unimpressed with the sleepy little town. However, she has a change of heart when she meets Spirit, a wild Mustang who shares her independent ideology, and befriends two local horseback riders, Abigail Stone and Pru Granger, who the latter’s father, stable owner Al Granger, is the best friend of Lucky’s father. When an evil horse wrangler and his team plan to capture Spirit and his herd and auction them off to a life of captivity and hard labor, Lucky enlists her new friends and bravely embarks on the adventure of a lifetime to rescue the horse who has given her freedom and a sense of purpose, and has helped Lucky discover a connection to her mother’s legacy that she never expected.”

This one’s from co-director Elaine Bogan, making her first full-feature animated film with Ennio Torresan, working from a script written by Aury Wallington and Kristin Hahn.  Based on the Netflix series “Spirit Riding Free” by Aury Wallington and the 2002 film “Spirit: Stallion of the Cimarron,” “Spirit Untamed” gallops into theaters on June 4th.

I spoke with Lucky (voiced by Isabela Merced) and Pru (Marsai Martin) to talk about their roles and the film’s many wonderful themes and messages.

For more of my “Spirit Untamed” interviews, click here.