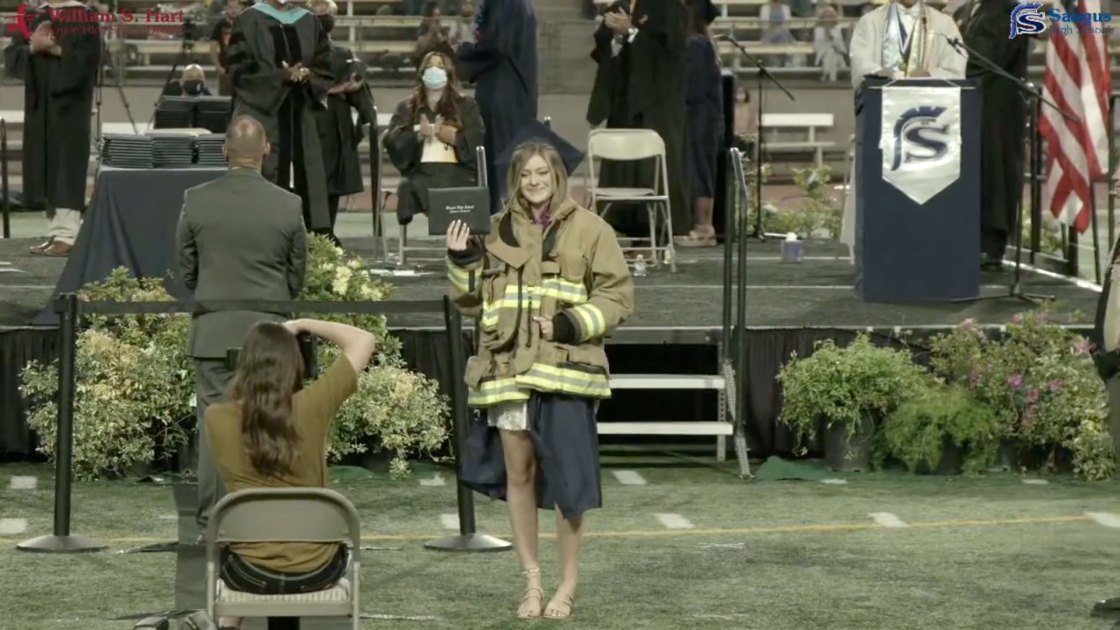 Joslyn Carlon wore her dad’s firefighting jacket over her graduation gown when she walked across the stage to accept her high school diploma on Thursday, just two days after he was killed in a shooting at his Los Angeles County fire station.

Dozens of firefighters dressed in black uniforms lined the entrance to College of the Canyons, in Santa Clarita, when Carlon and her family arrived for the Saugus High School graduation ceremony.

Her father, veteran firefighter Tory Carlon, was shot and killed on Tuesday at at Fire Station 81 in Agua Dulce by an off-duty co-worker, who later died of an apparent self-inflicted gunshot wound, according to authorities. An LAFD fire captain was also wounded in the shooting.

The crowd cheered as Joslyn Carlon’s name was read and she got a big hug as she was given her diploma.

She was accompanied by a sheriff’s deputy, who took her arm as she left the stage and patted her shoulder supportively. Reports said the deputy was a family friend.

Los Angeles County Fire Chief Daryl Osby described Tory Carlon on Tuesday as “a very brave, committed, loyal member of our department for over 20 years.” The 44-year-old had driven a fire truck and began his career as an explorer in the forestry department.

He and his wife, Heidi, have three children, according to a GoFundMe campaign that was set up for the family.

About 300 firefighters and law enforcement officers were there for the ceremony, KABC reported, including some who worked closely with Carlon.

“It was a hard night, but I was proud to be here and support that family,” L.A. County firefighter-paramedic Gary Reichman told KABC. “To honor that beautiful girl tonight meant so much to me, to all my colleagues and friends.”

Reichman told KABC that he worked at Carlon’s station and was off on the day of the shooting.

Saugus High School was the scene of a school shooting in 2019 that left two students dead.