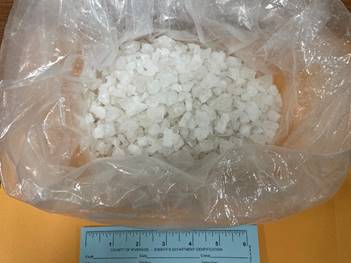 Three documented gang members accused of holding a man at gunpoint and beating him up in the unincorporated community of Oasis 2 1/2 months ago were arrested Wednesday by sheriff’s investigators, who also seized a large quantity of methamphetamine from one of the suspects, the sheriff’s department reported.

Albin Docnal Tadeo, 25, Jesus Garcia Rodriguez, 18, and Diego Marquez Martinez, 24, all of Oasis, were booked into the John Benoit Detention Center in Indio on suspicion of assault with a deadly weapon, conspiracy, aggravated mayhem and participating in a criminal street gang.

Rodriguez was additionally booked on suspicion of possessing methamphetamine for sale after investigators seized 1.8 pounds of the drug that he allegedly was carrying at the time of his arrest, according to Riverside County sheriff’s Sgt. Mariano Matos III.

He said the suspects were arrested during the execution of three search warrants — one in the 68-900 block of Harrison Street, and two at houses located in the 76-000 block of Pierce Street.

They were sought in connection to an assault reported March 26 in Oasis in which a man was held at gunpoint and assaulted — why was unclear. The man, whose name was withheld, suffered injuries described as major, according to the sheriff’s department.