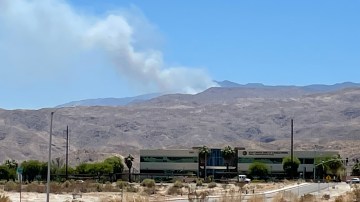 Two homes have been destroyed and three homes and three outbuildings damaged in the Flats Fire southwest of Palm Desert.  Highway 74 is closed and residents of Pinyon Crest are being told to leave their homes.

According to Tweets from San Bernardino National Forest (SBNF), the Flats Fire broke out late Sunday morning and by 4:00PM had burned 225 acres.  There is zero percent containment and the fire is spreading at a moderate rate.  Photos Tweeted by SBNF show the fire enveloping Highway 74 in smoke.

Mandatory evacuations have been ordered for Pinyon Crest.  Residents for Pinyon and Alpine Village are being told to prepare to evacuate.  The Riverside County Sheriff’s Department is helping with the evacuations, according to the SBNF.  An evacuation center has been established at Idyllwild School,  26700 Highway 243, Idyllwild.

The Cactus Spring Trail and Pinyon and Ribbonwood campgrounds have been closed. Other recreation destinations (trails, overlooks) in the area of the Highway 74 closure are inaccessible.

The US Forest Service reports that flames were first spotted at 11:15 a.m. just west of the Pinyon Flat Campground.

A column of smoke is visible throughout the Coachella Valley.  Some residents of Palm Desert report ash falling at their homes. 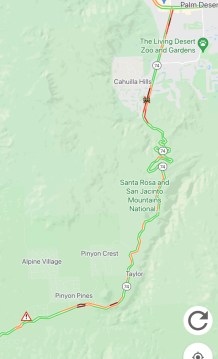 The fire jumped Highway 74 prompting the closure of the highway between Palowet Dr. in Palm Desert and Highway 371 near Garner Valley/Anza.  According to SBNF, the fire is burning in a northeasterly direction.  Thirteen aircraft are on order to battle the fire.

NBC Palm Springs has crews en route and will have full coverage this afternoon at 5:00 and 6:00.