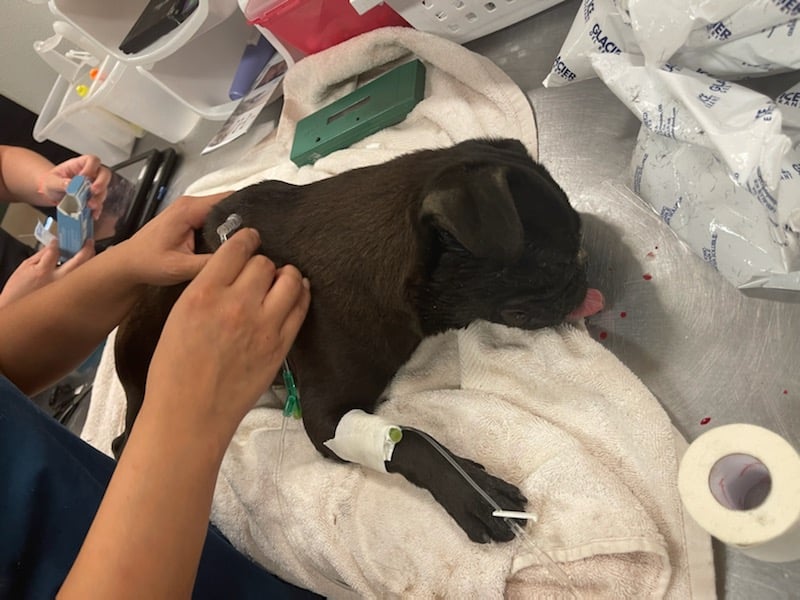 On Wednesday, at 3:00 o’clock in the afternoon, the hottest time of the day, in the middle of a record breaking heat wave Riverside County animal control officers spotted a dog in the middle of the street in Mecca.

“Officer Marquez saw a dog flopping around in the road … they picked up the dog thinking it was hit by a car so they rushed it all the way to Thousand Palms Animal Campus,” says Lt. Luis Rosa, in field services.

The black pug had not been hit by a car. It was suffering heat exhaustion vet tech Carla Hernandez examined the dog.

“She came in critical, she came with a temperature of 109.4,” says Hernandez.

A dog’s temperature above 103 is considered abnormal, at 107 to 109, a dog will suffer organ failure and death.

Still the team tried desperately to save the dog’s life, giving the dog IV fluids, and laying her on ice packs (something not recommended for home treatment).

“We tried to do everything in our power to bring that temperature down we actually did but she was in a very critical state,” says Hernandez.

The little black pug was too far gone, they had to euthanize her.

“It’s sad, it’s always sad, especially something that could be preventable,” says Hernandez.

Jason Escobar who just found Lola, his new best friend at the Coachella Valley Animal Campus, learned of the little pug, “That’s terrible, so sad,” he said, and offered this reminder to pet owners, “you should keep them in our house and let them stay for a while until it gets cooler … don’t leave your dogs outside in the heat!”

Dogs cannot control their body temperature by sweating like humans, they do it by panting. They overheat easily. For dogs, being outside in this heat, can quickly turn dangerous.
Dogs like pugs with short snouts are even more susceptible to heat stroke.
Signs that your dog is suffering heat exhaustion include heavy panting, excessive drooling, and sticky gums.
And if your dog is lethargic or disoriented and not responding to your efforts to cool it down, seek medical attention immediately.

“It was a young dog that could have lived a healthy life,” says Hernandez.

“This is a tragic but avoidable outcome,” Animal Services Director Julie Bank said, adding, “it is a grave reminder to be extra cautious with our pets when weather conditions become extreme. I commend my team for doing all they could to safe this poor, little dog.”