Victims’ Advocate in Cosby Trial: This is a very traumatizing, retraumatizing day for survivors 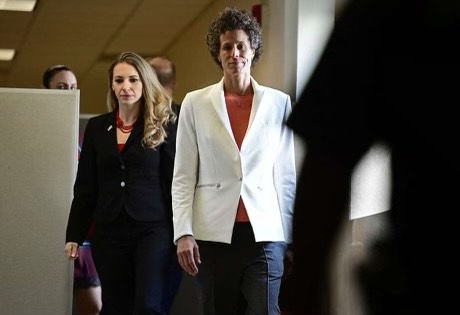 Bill Cosby has been released from prison after an unexpected decision by the Pennsylvania Supreme Court, the court vacated Cosby’s 2018 conviction and sentence of ten years for the drugging and sexually assaulting Andrea Constand at his home in 2004.

“To be there during the trial was just heart wrenching,” says victims’ rights advocate, Angela Rose, a sexual assault survivor, sat next to her during the trial providing support.
Over 50 victims came forward with similar allegations against Cosby, some testified during the trial.

Rose says this decision came out of nowhere and has them reeling, “There was no preparation to hear this news and I can tell you all of a sudden my phone started to blow up with all of the survivors and a lot of the survivors from the Cosby case, PAVE was there with Andrea Constand through the trial and so I  can tell you how difficult it was, for not only Andrea but for other survivors to courageously take the stand and to talk about and relive the horrifying experiences and impacts it’s had on their lives so I know that this is a very traumatizing, retraumatizing day for survivors.”

The founder of Providing Awareness / Victims Advocate or PAVE, the non profit that helps survivors thrive after sexual abuse, human trafficking and domestic violence says other victims are reaching out, “This doesn’t just impact the survivors of Bill Cosby, this impacts survivors across the country, men and women who saw this case as a huge win for survivors when he went to prison and now that he’s being let out today, with no warning, is sending shockwaves through our survivor community.”

Cosby maintains his innocence but Rose says he will have to answer for his crimes, “Bill Cosby he knows what he’s done to these women and he has to live with that every single day and God will be the judge of that but I think to show no remorse is something that we see in a lot of serial perpetrators … he definitely in my mind should not be on the street, but at least the truth came out in court.”

So why did this happen?

Rose sees thing differently, “People with power, with influence with money are able to find ways to circumvent the justice system and i think that this is so scary for so many survivors,” adding she fears this will silence many from coming forward.

The decision prevents him from being retried, Dolan says if new victims come forward there may be a case, “The prosecution could be brought but I think the relevance of the Philadelphia, Pennsylvania case would impact on this pretty seriously … it would be very dangerous to go forward on something like that.”

Rose says legal experts are looking into how to move forward and not sure what will come next but despite this setback, she’s incredibly proud of Constand and survivors in this case who by
coming forward created lasting change.

Rose says PAVE is holding a virtual event titled Rising, on Sunday July 11, 2011 at 5 p.m. to celebrate their 20 years of advocating for victims and bringing awareness and invites all survivors to unite and draw courage, strength and hope. To join click here: Rising