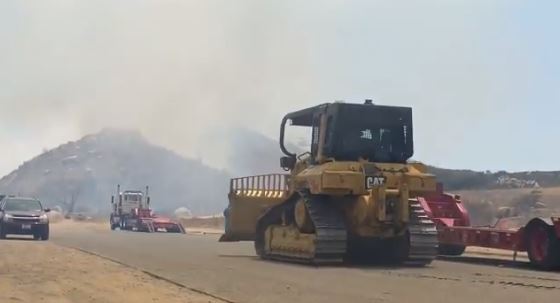 The blaze was reported at 1:10 p.m. along southbound I-215, near Scott Road, according to the Riverside County Fire Department.

The agency said multiple engine and hand crews from the county and Murrieta Fire & Rescue were sent to the location, encountering flames moving to the east through medium vegetation.

California Highway Patrol officers shut down two lanes on southbound I- 215 for public safety, forcing motorists into the fast lane, causing major slowing in the area. About 2:30 p.m., at county fire officials’ request, the CHP closed all southbound lanes while firefighters lit backfires to burn off remaining potential wildfire fuels.

With the help of three Cal Fire air tankers and a water-dropping helicopter, crews established tentative containment lines around most of the burn zone, according to reports from the scene. The tankers returned to their respective bases shortly before 3 p.m.

A fire in the engine block of a vehicle that pulled to the side of the freeway apparently triggered the blaze, officials said.

Just after 3 p.m., the CHP began to reopen southbound I-215. However, all lanes were not expected to be fully available until sometime after 4 p.m.