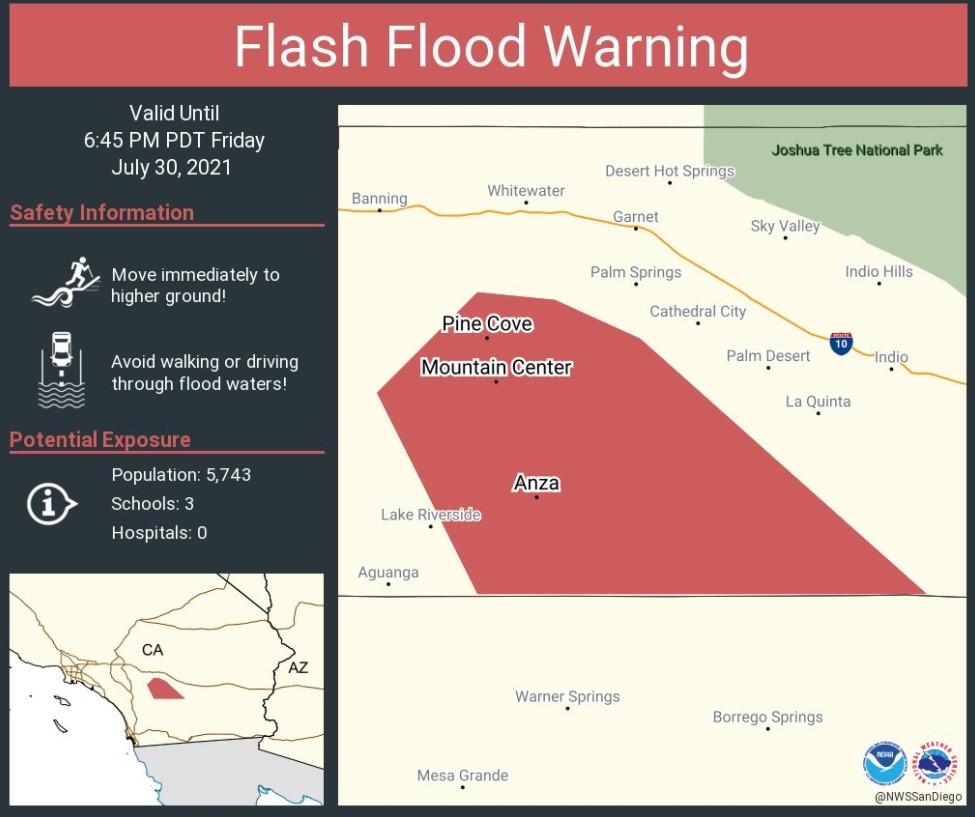 The National Weather Service issued a flash flood warning that will be in effect until 6:45 p.m. Friday, noting that the storm system had dropped between 2 and 4 inches of rain in some areas.

⚡️An incredible view of the Severe T-Storm warned cell south of Idyllwild. This storm is producing torrential rainfall, frequent lightning and hail. Seek shelter if nearby and remember to Turn Around, Don't Drown! Image courtesy of HPWREN.#CAwx pic.twitter.com/BVqIzmIQMB

According to the NWS, flooding was possible in areas including southeastern Palm Springs, Temecula, Anza, Idyllwild, Mountain Center, Lake Hemet and the Cahuilla Indian Reservation.

Highway 243 between Banning and Idyllwild was considered at risk of flooding, along with Highway 74 between Mountain Center and Anza, between Anza and Palm Desert, and from Hemet to Mountain Center.

“In hilly terrain there are hundreds of low water crossings which are potentially dangerous in heavy rain,” according to the NWS. “Do not attempt to cross flooded roads. Find an alternate route.”

The NWS also issued a severe thunderstorm warning in response to heavy rain falling between Mountain Center and Anza. The Mountain Center area received roughly 1.5 inches of rain in about an hour, according to the weather service. Forecasters said the storm system included winds up to 60 mph and quarter-sized hail.

Latest radar view of the heavy rain along highway 74 where flash flooding is likely #monsoon #CAWX follow https://t.co/V0nAYmQhal for the latest updates on radar pic.twitter.com/rCQ9nQLTph

“Hail damage to vehicles is expected,” according to the NWS. “Expect wind damage to roofs, siding and trees.”

Forecasters warned on Twitter that a storm cell south of Idyllwild was “producing torrential rainfall, frequent lightning and hail.”