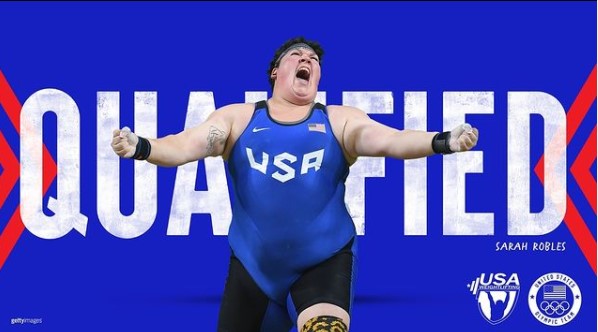 Sarah Robles, who was raised in Desert Hot Springs, Monday became the first American woman to win two Olympic medals in weightlifting, winning the bronze in the super heavyweight class.

Robles began the competition in the over-87 kilograms class at the Tokyo International Forum by successfully making all three of her lifts in the clean and jerk. Her final lift of 128 kilograms tied the American record set in 2003 by Olympic medalist Cheryl Haworth.

Robles lifted 154 kilograms on her second attempt in the clean and jerk to give her at total of 282 kilograms. She was unsuccessful in her final attempt at 157 kilograms.

Li Wenwen of China won the gold medal with an Olympic-record total of 320 kilograms. Emily Campbell of Great Britain won the silver medal with a total of 283 kilograms, one more than Robles.

Her bronze medal and Katherine Nye’s silver medal in the women’s 76- kilogram class Sunday gave the U.S. two medals in weightlifting for the first time since 2000.

Weightlifting competitions consist of two portions, the snatch and the clean and jerk, with each athlete given three attempts in both.

In the snatch, the bar is lifted from the floor to overhead in one motion. In the clean and jerk, the barbell is lifted overhead in two continuous motions — the clean, which brings the bar to the shoulders, and the jerk, in which the athlete raises the bar overhead.

The best total in each successful lift is combined for the overall total.

Robles earned her third Olympic berth by scoring enough points in qualifying events from 2018-2020. She finished seventh in the super heavyweight class in the 2012 London Games.

Women’s weightlifting has been part of the Olympics since 2000. The U.S. has won five medals. The other medals came in 2000 — a gold by Tara Nott and a bronze by Haworth.

She competes despite having a condition called Madelung’s deformity in both her arms, which results in the radius bones being shorter than normal and bowed — causing her pain when she lifts or does everyday motions. Robles uses wrist straps and warming creams to alleviate pain during her lifts.

She was diagnosed with polycystic ovary syndrome in 2007, which has affected her weight and caused other health problems.

Robles received treatment for sleep apnea in early 2021, after finding the condition had been affecting her performances.

“My training was complete garbage,” Robles wrote on her Facebook page May 4. “My body hurt all the time, I was having trouble thinking, and in every free minute of my time I was tucked in bed trying to sleep or just `rest my eyes’ until the next thing I had to do.

“No matter what I did with my diet, training, recovery, I was not getting better. I felt like my body just couldn’t take it anymore. I knew there was something else going on. I sucked it up and got a sleep study done.

“I had so much fear and worse — shame that stopped me from submitting myself to testing. One fear was that if I knew I had sleep apnea, I would be afraid to sleep and would lose even more sleep.”

Robles added, “The sleep doctors and coaches were so nice throughout the process and everyone involved helped quench some fears of mine.”

“After just one night on sleep treatment I felt better and I (felt) like this is going to be life-changing for the better,” Robles said.

Robles received a two-year suspension in 2014 from the U.S. Anti- Doping Agency, retroactive to Aug. 8, 2013, the date she was provisionally suspended by the IWF.

Robles tested positive for the presence of an exogenous androgenic anabolic steroid and/or its metabolites as the result of one out-of-competition and two in-competition urine samples collected by both U.S. Anti-Doping Agency and the IWF.

Robles said she used a supplement containing the substance on advice from doctors to treat polycystic ovary syndrome.

Robles began weightlifting at San Jacinto High School, when her track and field coach, Rich McClure, had her use Olympic lifts to improve her performance in the shot put and discus throw.

Robles competed in some local weightlifting meets in 2004 and 2005 “and I fell in love with it,” she said.

Robles received athletic scholarships to Alabama and Arizona State to compete in track and field, but changed those plans after her first season in 2008, when she met weightlifting coach Joe Micela and decided to shift her focus.