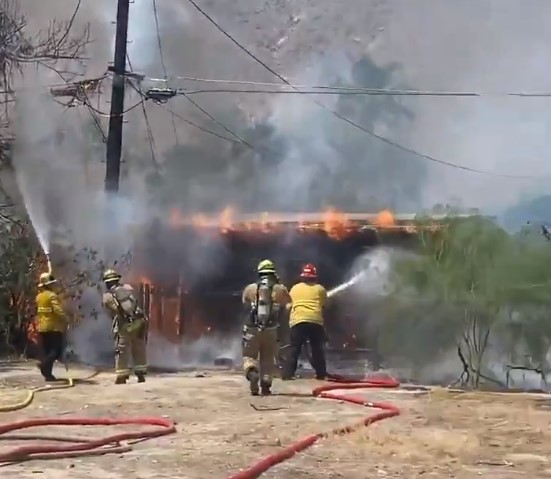 An arrest woman is behind bars Monday after two early morning fires in Palm Springs.

The first call was for a fire in the back of a business in the 300 block of South Palm Canyon Drive at 5 a.m.

When crews arrived they found a stack of debris outside of the business engulfed in flames.  The fire was quickly contained.

At that time investigators suspected arson and were looking for a woman wearing an oversized blue shirt, according to Palm Springs Police.

Later in the morning, firefighters responded to a fire at a home in the 500 block of Calle Abronia South, just blocks from Ramon Road and Indian Canyon Drive.

Police say a brush fires started around 11:30 a.m. and then spread to an empty house nearby.

According to a tweet by the Palm Springs Fire Department, one person is in custody who is suspected of arson at this location and a second location earlier Monday morning.

At the scene, police arrested Alba Espinoza. She is facing arson, aggravated arson and several other charges.

Espinoza was transported to the Indio jail.

There are no injures to report.

ALERT- Structure Fire, PSFD units are currently onscene of a structure fire in the 500 block of Calle Abronia. No reported injuries to residents or firefighters at this time. PSPD has 1 person in custody for arson connected to this fire and a second one this morning. pic.twitter.com/nCUapmnl2M