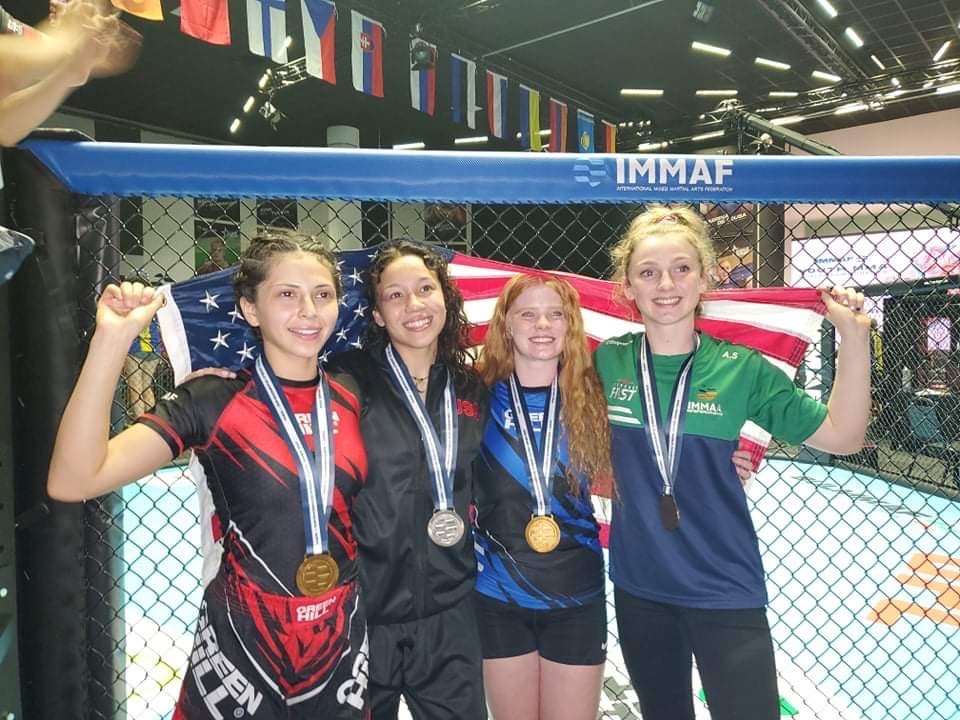 Four Desert Hot Springs MMA fighters just got back from the IMMAF Youth World Championships in Sofia, Bulgaria and brought home some hardware.

Their Sensei, Eddie Bates of Kihon MMA in Desert Hot Springs,  is extremely proud of the girls’ accomplishments.

“Girls fought amazing, they trained every single day for this event and they showed it. It’s emotional, I love these kids like they’re my own and when I see them succeed, it’s more gratifying to see that they succeed than for them to have medals.”

Hannah Wagstaff went 4-0 to win the championship in her bracket and bring home a gold medal.

“I had some really good competition out there.” Hannah says, “probably the hardest competition I’ve had yet. So it really pushed me to show what I can actually do and push my limits.”

Andrea Frisque was the silver medalist from last year, and she took home another silver again this year. Andrea won her first two fights and lost in the championship round.

“It was just life-changing, we all had the chance to go fight for our country, and I think that’s really cool. I really give props to my teammates who helped me and my coach Eddie, you know, without him we kind of wouldn’t be here.”

Allison Keenan was in the same weight class as Andrea, and so Allison took home the bronze. She won her first fight but lost the second one when it went to decision.

“This little medal, means something, just so much pride like wow, I did that.”

Irann Orozco’s hard work also paid off and she brings home a bronze medal, after winning her first fight and losing the second when it went to decision.

“My first fight against Ukraine, I’ve never ever had a feeling like that, and it still brings me butterflies. I’m so proud of all of us that we did so well in our hard work really did pay off.”

Hannah says that the city of Desert Hot Springs has been extremely supportive of these girls from day one.

“The support from the community has been outstanding, it’s crazy still you know.”

“The city’s been behind us throughout.” Sensei Eddie says, “I am very grateful for all the support big thanks to Desert Hot Springs.”

I can’t believe how much how many people reached out and helped fund our trip. And I’m so grateful for all of them. Like I want to thank every single one of them. My parents,
I really love them for their support and everything and I’m just glad to have the chance