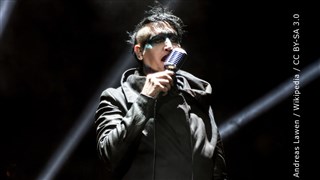 A camera operator is suing Marilyn Manson, alleging the shock rocker approached her twice during a 2019 concert in New Hampshire, spitting upon her the first time and later blowing substance onto her from his nose.

A Manson representative could not be immediately reached.

Fountain was working in front of the stage at the Manson concert at the Bank of New Hampshire Pavilion in Gilford, N.H., on Aug. 18, 2019, the suit states. She stood on a platform and case to try and get the best shots, according to the suit.

At about 8:15 p.m., Manson, whose real name is Brian Hugh Warner, moved toward Fountain, stooped down and spat into her camera lens, with the spray falling onto her right hand, the suit states.

Both the camera lens and hood had to be cleaned, the suit states.

“Ms. Fountain was shocked and disgusted by (Manson’s) conduct,” the suit states.

The director who was nearby called the incident “gross and disgusting,” according to the suit.

After Fountain resumed her work, Manson again approached her, but this time she left the platform quickly to avoid another incident and the singer walked away, the suit states. The veteran camera operator then started filming from a higher angle, the suit states.

However, Manson then abruptly turned around and again stepped near Fountain and blew substance from one of his nostrils at her, the suit states. An angry Fountain cursed at Manson, who showed no reaction, the suit states.

“(Manson) mocked and pointed at Ms. Fountain while laughing in her face,” the suit states.

The alleged assault was captured on the large venue monitors, and some fans who recorded what Manson did later posted their video on YouTube, the suit states.

“After being humiliated and assaulted with bodily fluids, she immediately left the pit and went to the restroom facilities,” the suit states.

Fountain was wearing short sleeves and shorts and had to wash her arms and legs, the suit states.

Fountain was unable to continue her work for the remainder of the event, the suit states. She later underwent two tests within several months to ensure that she had not contracted any communicable diseases, the suit states.

Manson, now 52, surrendered in July to police in Los Angeles in connection with an arrest warrant. He is charged with two misdemeanor counts of simple assault, which can each result in a jail sentence of less than a year and a $2,000 fine if convicted.