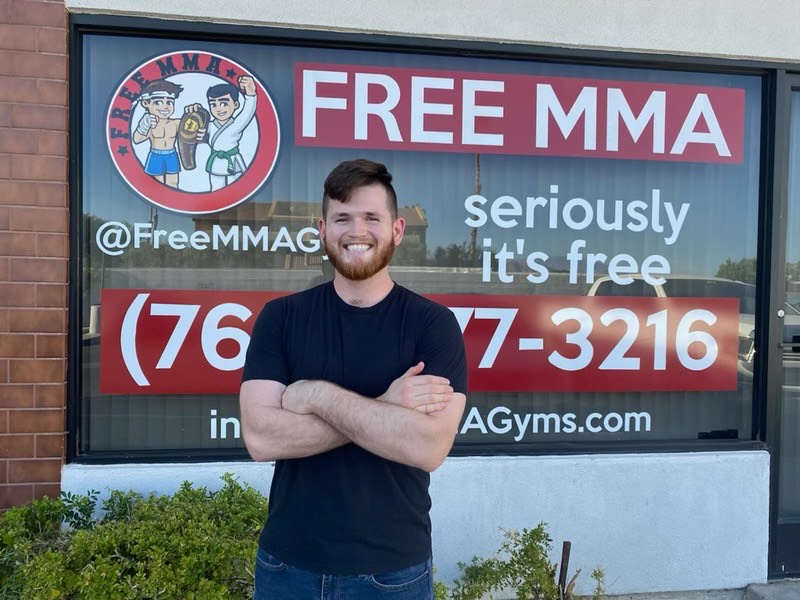 Organized sports have been known to change people’s lives for the better and that is especially true for Jarred “Bear” Fiorda, an MMA fighter from Desert Hot Springs. His life changed when he started MMA training as a child and now his life mission is to give the same opportunity he had to others in the Coachella Valley. Fiorda opened up the non-profit Free MMA gym with his mom back in 2018 in hopes of helping those who were like him as a child.

“I started martial arts back when I was five years old is because my dad died and that left me very, very angry. I started acting out in school, physically getting in different fights and my mom decided if I’m going to be this aggressive in school, she’s gonna put me somewhere to do it productively. So she put me into martial arts class, and I fell in love with it.”

It’s in the name, Free MMA is 100% free, Fiorda designed it that way because he wanted to be a positive resource within his community after watching so many friends he grew up within the gym go down the wrong path due to not having an outlet like martial arts.

“Unfortunately, a lot of my friends who would join me at the gym, they fall out, they get in different, I say problems, but realistically, they joined gangs got into drugs, and some of them died. So, that hurt me but also let me know that if they stayed in martial arts if they had stayed on the same path that I was, they’d have the same opportunities that I did. That’s why me and my mom started this foundation here because we wanted to give everyone the same opportunities that I have, regardless of whether they can afford it or not.”

You can be too young but never too old 😁 #mma #martialarts #age pic.twitter.com/QvISJ3ORnz

Everything inside Free MMA, from the mats on the floor to the artwork on the walls has been donated by community members, Fiorda also uses social media and prize money from his professional fights to fund this non-profit.

“All the social media I do, all the money I make from that all go here to Free MMA. Including the money I make from fights will go to support the nonprofit here. So we have a great community response and then I’m giving everything I can to make sure this gym stays going for everyone for as long as possible.”

Free MMA offers a wide range of classes from “Ages six, to one hundred and six!” No matter how old you are, Free MMA is going to implement confidence as you learn the art of self-defense and discipline.

“When it comes to self-defense, a good part about coming to martial arts is just how good you’re gonna feel like knowing that you’re able to defend yourself. That’s the biggest thing. However, for the most part, anyone can come in. It’s not like we restrict anyone based on anything, do you want to come to take martial arts to come in right ahead through the doors. Again, this is something that benefited me my entire life. If I can give someone any amount of happiness through martial arts, and I’ve done when my goal was and that’s I want to give to everybody.”