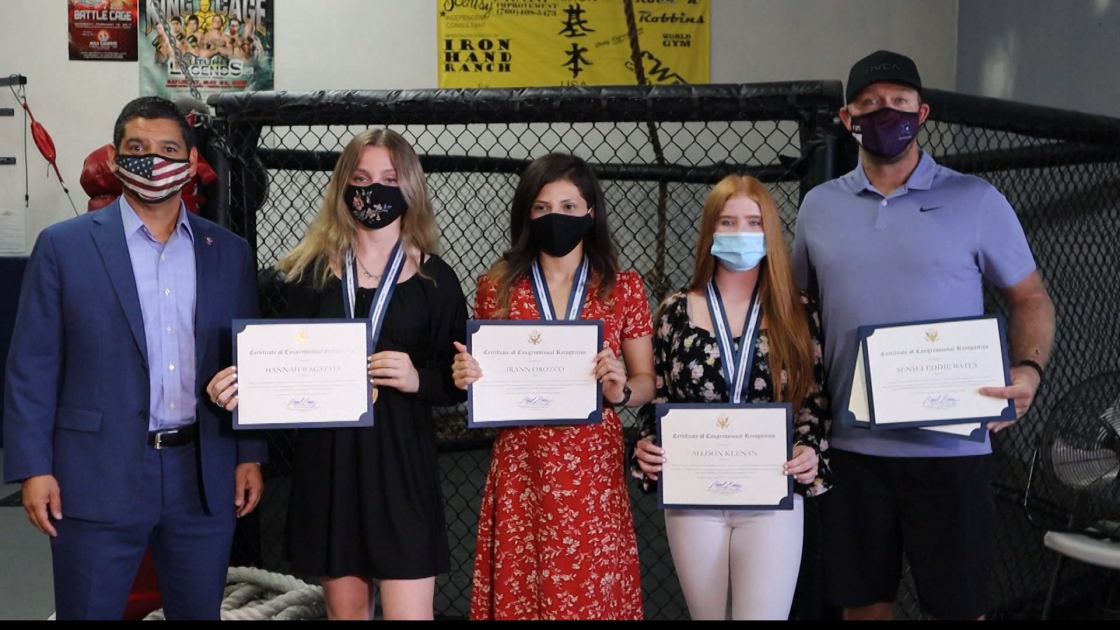 Four MMA cage fighters from Desert Hot Springs are at the top of their sport and recently traveled internationally to compete in world championships, and now they’re being honored by Congressman Raul Ruiz (D) 36th District.

“My hat’s off to them, today we’re gonna salute them and I want everybody to know their names because this is an incredible accomplishment that they’ve done at such an early age.”

Hannah Wagstaff, Irann Orozco, Andrea Frisque, and Allison Keenan were all bestowed congressional honor by Representative Raul Ruiz as congratulations on their success after they each finished top three at the IMMAF Youth World Championships.

“Having the fact that a congressman is gonna know who I am, I’ve gotten to meet him,” says Hannah Wagstaff, “that’s really exciting to me.”

Irann and her mother were having passport issues prior to their trip, and if it wasn’t for Congressman Ruiz, Irann says that they would have never made it to the competition.

“He really came through and helped us personally and I feel very grateful that he would do that for us.”

Gabriela Franco Felt was touched by how Representative Ruiz came through for her daughter.

“You know, sometimes you don’t expect that from someone that is so busy, and he’s a big politician that really cares.”

Congressman Ruiz and his office were more than happy to help Irann and her mother get their passports in time to leave for the World Competition in Bulgaria.

“Well, we weren’t gonna deny the opportunity for them to go and compete in the sport, and so we did our part but let me tell you, it was a small part.”

Congressman Ruiz says that these girls are role models to young athletes across the Coachella Valley.

Hannah says that receiving recognition by Congressman Ruiz is an amazing honor not only to her but to her family and the city of Desert Hot Springs.

“I love having my city recognize me, my family recognizes me but something greater than that, something a lot more people know, that’s really exciting.”

Sensei Eddie Bates was also given a congressional honor for teaching these four ladies how to be amazing role models in their sport and their community.