`Rock Fire’ in Anza Believed to Be Man-Made 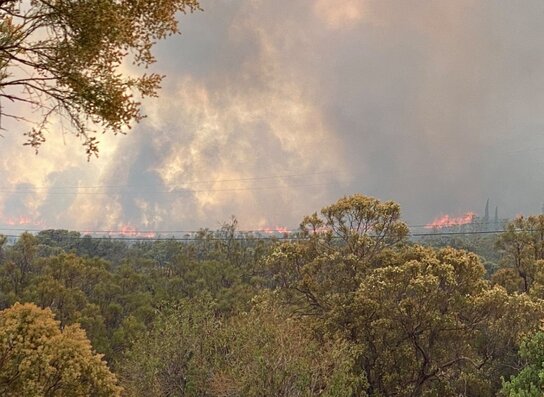 Riverside County Fire Department law enforcement Friday are looking for the owners of a marijuana cultivation site located in the area of a 295-acre brush fire on the south end of Anza that destroyed multiple homes and other structures.

The blaze, known as the Rock fire, was reported shortly before 2 p.m. Tuesday in the area of Gulley View Drive and Rock Canyon Road, bordering the Cahuilla Indian Reservation.

During suppression efforts, fire officials discovered a marijuana cultivation site in the 57000 block of Gulley View Drive. Officials stated they are seeking the property owners and anyone who may have been on the property at the time the fire started.

The fire’s forward rate of spread was stopped four hours after it erupted, but the flames continued to expand into rocky hillsides and open spaces Tuesday night.

On Wednesday, crews tightened up containment lines around most of the brusher, but it flared up in several places, requiring a Cal Fire water- dropping helicopter to return to the area to support ground personnel.

One firefighter suffered an unspecified minor injury Wednesday and was taken to a hospital for treatment.

There were evacuations Tuesday in the area of Bailey and Terwilliger roads, as well as Tule Canyon Truck Trail and Nicholson Springs Road, according to the fire department. All evacuation orders were lifted at daybreak Wednesday.

The fire was 85% contained on Friday and fire crews remained on scene to strengthen containment lines, according to the Riverside County Fire Department.

Officials said four residences and seven outbuildings were consumed by the fire. It was unclear whether all of the properties were occupied.

At the height of the brusher, six Cal Fire water-dropping helicopters and five air tankers were called in to make runs. All aircraft were released and returned to their bases Tuesday night.

Anyone with information regarding the marijuana cultivation site was urged to call 800-644-2836.