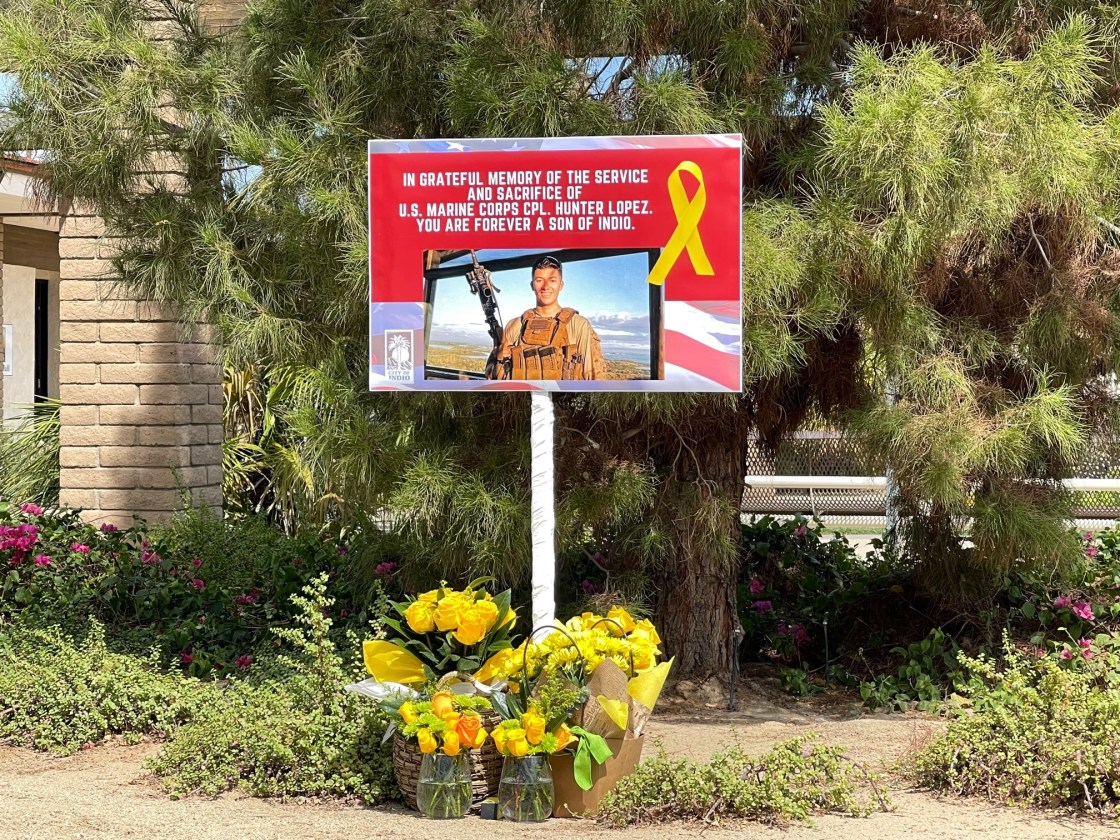 Honoring one of its own, the city of Indio invited residents Monday to leave items of remembrance at a photo and flower memorial honoring U.S. Marine Cpl. Hunter Lopez, an Indio resident who was one of 13 service members killed in a bombing in Afghanistan.

The memorial honoring Lopez, 22, includes photos and yellow roses in the shade of a large Afghan pine tree on the west side of City Hall, 100 Civic Center Mall. The photo memorial reads, “In grateful memory of the service and sacrifice of U.S. Marine Corps Cpl. Hunter Lopez. You are forever a son of Indio.”

Lopez and 12 other service members died Thursday in a suicide bombing at the airport in Kabul, Afghanistan, amid the withdrawal of U.S. troops from the country.

Indio officials said residents can leave items of remembrance and tribute at the City Hall memorial through Sept. 11. They asked that people do not leave lighted candles.

The Indio City Council was expected to hold a moment of silence in honor of Lopez during its afternoon meeting Monday.

“Hunter was selfless in his desire to serve his country and in so doing paid the ultimate sacrifice,” Indio Mayor Elaine Holmes said in a statement. “Thank you Hunter, and all whose lives were lost, and all who serve, for fighting to protect our freedom.”

Indio Mayor Pro Tem Waymond Fermon said he would ask the council to prepare a memorial proclamation to present to the Lopez family at a later date, along with a resolution honoring Lopez and the others killed in the attack.

Lopez was one of two Riverside County residents killed in the Kabul bombing. Kareem Mae’Lee Grant Nikoui, 20, a Marine lance corporal from Norco, also died in the attack.