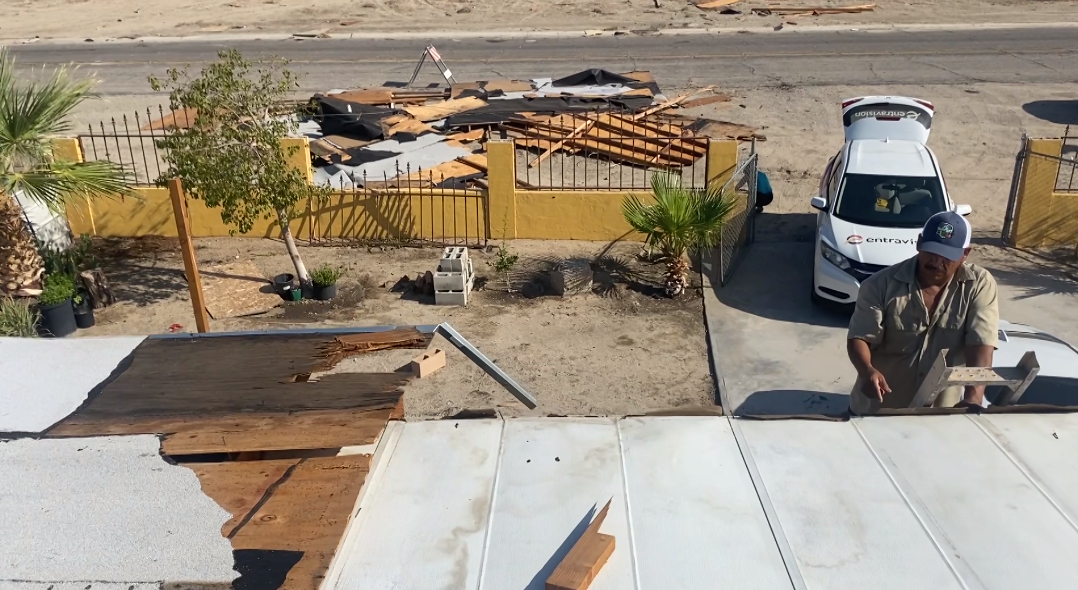 undreds of locals in the far eastern Coachella Valley woke up to a dangerous scene.

The Centeno family knows first-hand, it was their roof that was ripped off of their home and flung across the street amid high winds. Almost destroying the only home they have ever owned.

“I was in shock, I couldn’t believe it,” said Edgar Centeno Garcia who was upset over the damages the wind caused on his family’s home.

Edgar and his family from North Shore say the missing roof is just one of their concerns, they’re also struggling to deal with the ongoing power outage.

“We have one convenient store and that convenient store probably has all the ice taken out from the locals. Same reason that there is no electricity, so we need to find a way to get fresh food just so it can stay here for longer.”

“We don’t have a job because we work in the fields and not many companies are harvesting at the moment. and we have tried to apply for unemployment but there is no hope,” said Edgars mother, Maria Guadalupe Centeno.

The family attempted to contact Riverside County for support, but when emergency management services arrived at the house, Edgar says they did not help.

Only informing them it was out of their hands.

A disappointment for the family who was forced to hammer down the remains of their rooftop home on their own.

NBC Palm springs reached out to the county but they denied our request for an interview. Instead they shifted the responsibility to IID, saying they’re in charge when it comes to these disasters.

However, when we spoke to IID they said it’s not in their jurisdiction either.

Amid the finger pointing between lawmakers and the utility company, community leaders like Patricia Guitierrez say someone needs to step up and help.

“We know that there is an emergency management department for these kinds of situations. We know FEMA exists, these funds were allocated specifically for climate impacts like this situation. So there are ways that I think the county can really be able to use those funds to provide immediate support for the communities impacted,” said Guitierrez

As of 10 A.M.  On Tuesday IID was only able to restore power to 300 customers but many remained without power, food and proper shelter in one of the hottest months of the year.

“We have been asking for generators but I’m pretty sure they are not going to give it to us because they will probably say there aren’t enough funds,” said Eillen Rosales, a resident in North Shore who is also affected by the severe weather storm.

Supervisor Manuel Perez said in a statement the county’s ‘incident management team’ will be mobilizing resources to feed people, as well as provide cooling centers and other shelter options.

If you are one the of the residents impacted by the weather storm you may contact the county’s emergency line 2-1-1.