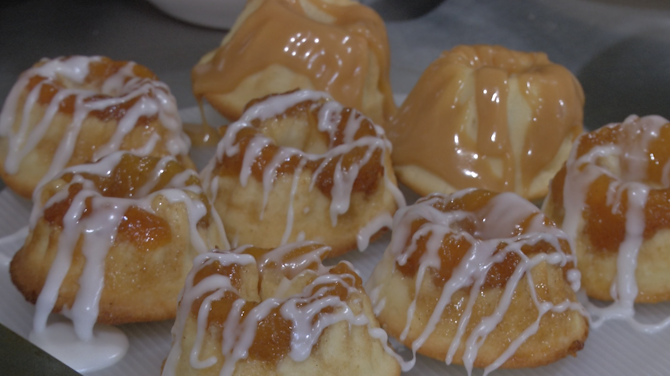 “We’ve been in the kitchen baking since we were younger, like since we could walk,” said Jamiah Hall.

Jamiah and Renaya Hall are the owners of the soul desserts bakery.

“It’s something we’ve done since they were growing up,” said Tanaya Hall, the mother of the girls. “They’ve been in a family of cooks and bakers and so now, it feels really awesome because now, I can be in the kitchen less.”

The 20-and-21-year-old sister duo started their bakery a year ago during the height of the pandemic, and have been serving the Coachella Valley desserts that have been shared from one generation to the next.

“It’s been passed down recipes- our Granny gave us recipes to her 7 Up cake, peach cobblers… My grandma’s banana pudding,” said Jamiah Hall. “We started learning the recipes and then we were in charge of it for Thanksgiving and Christmas… then finally (we) just made a business out of it.”

BabyGirls isn’t your traditional bake shop. Inspired by family, love, and Southern comfort foods, the sisters combine Southern classics like pound cake and peach cobbler to give customers the best of both worlds.

“When we bring that, they’re like ‘What is that? What is this?,’” said Jamiah Hall. “They’ve never seen the peach cobbler pound cake, so once you take a bite, it’s like a little of everything.”

“They’ve taken these recipes and- not only taken them, but they’ve perfected them.”

The Hall sisters said while they tweak the recipes to make them their own, one thing that will never change is the soul inspired family traditions.

The sister duo has been big dreams for their small business in North Palm Springs.

They say they wouldn’t be where they are today without the community’s support, and they hope they can represent the Coachella Valley well.

“We (hope) can be able to make something of ourselves and put our name on the map for our community,” said Jamiah Hall.