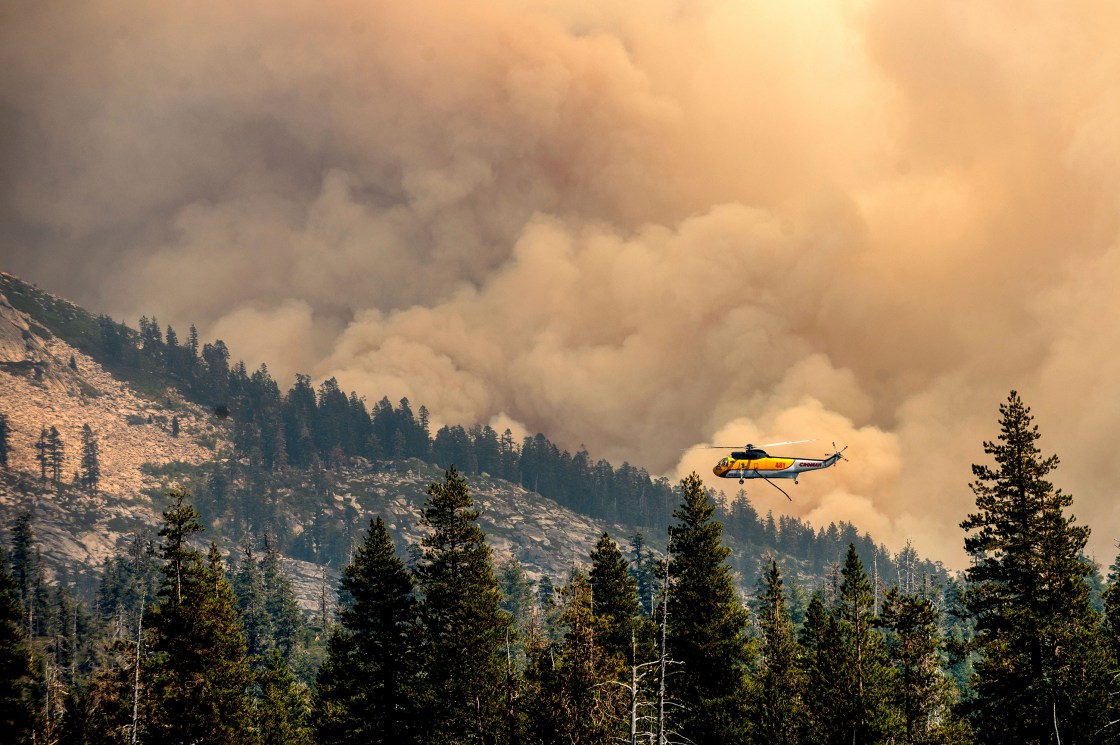 (CNN) — The winds fueling the massive Caldor Fire in California may subside in the coming days, bringing the possibility of lighter fire activity after the blaze drove thousands out of their homes this week.

“The issues and conditions that weather was causing, especially for the last couple of days, are going to be mitigated by much lighter winds across the fire,” Incident Meteorologist Jim Dudley said in an update.

The glimmer of good news comes after firefighters made some progress in taming the Caldor Fire, which had ballooned to 210,259 acres as of Thursday morning, with containment reaching 25%, according to Cal Fire.

The Caldor Fire is one of the few wildfires to cross from one side of the vast Sierra Nevada mountain range to the other.

The fire has been burning for nearly three weeks and is threatening the tourist city of South Lake Tahoe as it marches toward Nevada’s border.

South Lake Tahoe was spared Wednesday as the fire remained in the mountains, away from the main portion of the tourist city, “which is a very good thing,” Dave Lauchner, a spokesman for Cal Fire Team 6, told CNN. “At this point, we’ve been able to keep it out of South Lake Tahoe,” Lauchner said.

Lauchner is hopeful that firefighters can keep the flames at bay, but warns that a long firefight looms and South Lake Tahoe “isn’t out of the woods yet.”

“We got very little rain this last winter season, which definitely helped increase the fire dangerous this year. The grounds are dry. They’re very dangerous conditions,” he said Wednesday. “In 22 years of doing this, I’ve never seen fire conditions like we’re seeing now.”

The flames forced the evacuation of thousands of people from South Lake Tahoe this week and pose a risk to 32,387 structures after destroying 622 homes, officials said.

The city, normally bustling with vacationers, was a gray ghost town Tuesday, with empty parking lots, closed roads and shuttered businesses as the fire’s thick smoke hovered over the area.

Evacuated residents should expect to stay out of their homes for the next couple of days,” said Cal Fire’s Kevin Brown. Even where there is no immediate threat, it takes time to inspect roadways, clear tree hazards and get utilities back up and running, Brown said Thursday.

In neighboring Nevada, evacuation warnings were also issued for Douglas County as the Caldor Fire inches toward the state’s border, according to Cal Fire.

Wednesday, the White House approved Newsom’s request for a presidential emergency declaration to receive direct federal aid for the Caldor Fire. “The Department of Defense has trained and is deploying additional firefighters to support our ongoing firefighting efforts in California,” President Joe Biden said Thursday.

In addition to flames, heat, wind and difficult terrain, Caldor fire crews are also battling fatigue and Covid-19. Between 16-20 firefighters have been taken off the fire lines due to possible exposure to the virus, according to Brown.

“We’ve been battling fires for months now. We’ve had the Dixie fire, which is over 800,000 acres, and then this fire. This fire has been going on for almost three weeks now. Firefighters are getting tired, they’re getting drained,” said Lauchner.

As California battles 14 large active fires, one in particular has been devastating to communities.

The Dixie Fire — the state’s largest active fire — has seared 859,457 acres stretching across five counties since it began on July 14. As containment reached 55% as of Thursday, the Lassen County Sheriff’s Office issued new evacuation orders and warnings, according to Cal Fire.

The fire’s east zone was fueled by aggressive 40 mph winds, Cal Fire said, noting, “The fire was moving too fast to put personnel directly in its path.”

The fire has destroyed 1,282 structures and threatens 12,738 others. The cause is still under investigation.

California’s wildfire season been devastating this year, with 1.93 million acres up in flames from 7,003 fires so far, according to Cal Fire.