Riverside Seeks to Hire Vets, Others to Clean up, Improve Parks 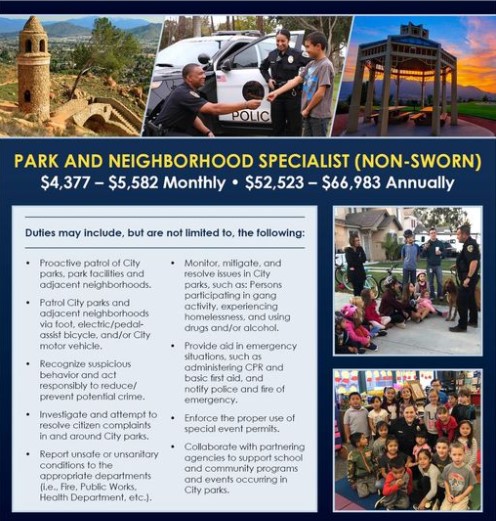 The city of Riverside is seeking to fill 20 newly created positions focused on patrolling, cleaning up and providing other services in municipal parks.

The “Park & Neighborhood Specialist” jobs were authorized by the City Council in July, and the recruitment window closes on Sept. 16.

Military veterans will receive preference credits when they apply. However, the jobs are open to all qualifying civilian applicants, according to city officials.

“This program is near and dear to my heart,” Mayor Patricia Lock Dawson said. “This will have a great impact to the city. We know families want and expect to feel safe in our parks and other public spaces. The PANS will give us the additional resources necessary to ensure Riversiders can enjoy the spaces.”

The specialists, who will function similar to park rangers, which the city phased out in the 1990s, will be non-sworn but will have citation powers similar to code enforcement officers, with the authority to write tickets for municipal code violations and “low-grade misdemeanors,” according to police Chief Larry Gonzalez.

“This came about as a result of the community telling us over and over that parks, trails and wilderness areas had been infiltrated by homeless, criminals, illegal off-road activity,” Gonzalez said. “It bugged me to hear people say, `I felt unsafe going to my kid’s Little League practice.”‘

In addition to patrolling parks and rousting squatters, the specialists will address unsanitary conditions, monitor illegal drug and gang activity and refer cases to police officers, render first aid, including CPR, in emergencies and help coordinate community and school events.

“We want them to have high visibility,” Gonzalez said.

He said the specialists will receive mental health training, alongside sworn personnel, enabling them to deal with potentially high-risk encounters involving transients and others.

More information is available at governmentjobs.com.