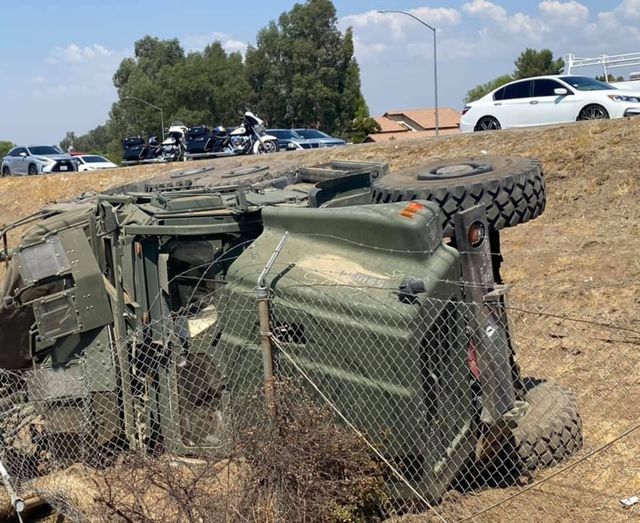 A military transport truck overturned on Interstate 215 in Menifee Wednesday, rolling down an embankment and into the parking lot of a hardware store, injuring at least two personnel.

The crash happened at about 12:40 p.m. on southbound I-215, just south of McCall Boulevard, according to the California Highway Patrol.

The agency said the vehicle was part of a convoy, possibly out of the U.S. Marine Corps base Camp Pendleton, and was hauling a trailer when it went out of control and over the side of the freeway.

The rig came to rest in the parking lot of Sun City Hardware, 28250 McCall Blvd., according to the Riverside County Fire Department.

There were reports of a fuel spill stemming from the crash, and a hazardous materials team was dispatched to initiate a clean-up.

Paramedics reached the location within a few minutes and found two victims, suffering moderate injuries. Their identities were not released. Both were taken to Inland Valley Medical Center in Wildomar in stable condition, according to reports from the scene.

The CHP shut down the slow lane of southbound I-215 for public safety. A Sigalert was issued at 1 p.m. because of the closure and resulting impacts on traffic.

CHP officers were investigating the crash.