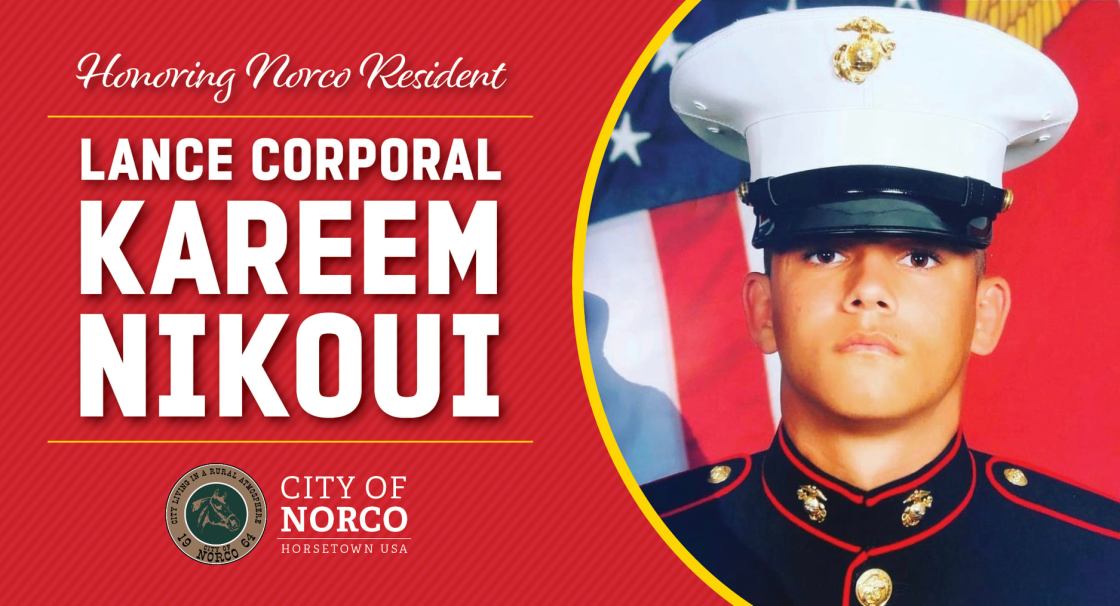 (CNS) – The remains of one of two Riverside County servicemen killed in a suicide attack in Afghanistan will be returned home Friday, with plans for a “Fallen Hero Procession” to salute him, a day ahead of his funeral in Riverside.

U.S. Marine Lance Cpl. Kareem Grant Nikoui, 20, of Norco died Aug. 26 in the terrorist attack at Kabul Airport that also claimed the lives of 10 of his fellow Leathernecks, a U.S. Navy corpsman and a U.S. Army soldier, with more than 100 Afghanis slain.

Nikoui was among the contingent providing security during the accelerated withdrawal of U.S. military personnel from the country, culminating in the Taliban’s retaking it.

Another Riverside County resident, 22-year-old Marine Cpl. Hunter Lopez of Indio, died in the same blast. Public memorial services are being held for him Thursday in the Coachella Valley, where he grew up.

According to Cypress-based Honoring Our Fallen, Nikoui’s remains are slated to be returned home about noon Friday. The nonprofit said that the Fallen Hero Procession is planned to salute the young man and his family as the flag-draped coffin is borne from Ontario International Airport to Crestlawn Mortuary in Riverside.

All those interested in honoring the fallen Marine were encouraged to take safe roadside positions, flags in hand, to pay respects as the procession passes.

“The airport arrival will remain private for the family,” Honoring Our Fallen founder Laura Herzog told City News Service. “But people can gather anywhere along the route. All the public safety agencies are aware of what’s going on, so people can gather on overpasses and other places all the way to the funeral home.”

The hearse and accompanying vehicles are tentatively scheduled to leave the tarmac between noon and 1 p.m. and will go south on Vineyard Avenue, joining the Pomona (60) Freeway eastbound, going a mile before transitioning to Interstate 15 southbound.

The procession will exit onto Sixth Street in Jurupa Valley, turning east again, then go north on California Avenue before turning east a final time onto North Drive, where the mortuary is located.

Herzog said the Riverside Fire Department will position two ladder trucks on either side of the funeral home entrance to pay respects as the procession enters. She said Marines from either the Twentynine Palms Ground Combat Center or Camp Pendleton will be deploying a giant American flag over one of the overpasses, but it was unclear which at this point.

A remembrance service was held for Nikoui at George Ingalls Equestrian Center on Sept. 4.

“The U.S. Marine, who graduated from Norco High School in 2019 and served in JROTC, was committed to serving his country and is survived by his mother, father and siblings,” according to a Norco city statement issued soon after the terrorist attack. “Nikoui’s name will be enshrined on the `Lest We Forget Wall’ at Ingalls Veterans Memorial Plaza, which honors Norconians who made the ultimate sacrifice while serving our nation.”

Pastor Greg Laurie will preside during the four-hour memorial, which will be open to the public. Between 2,000 and 3,000 people are expected to attend, according to Harvest.