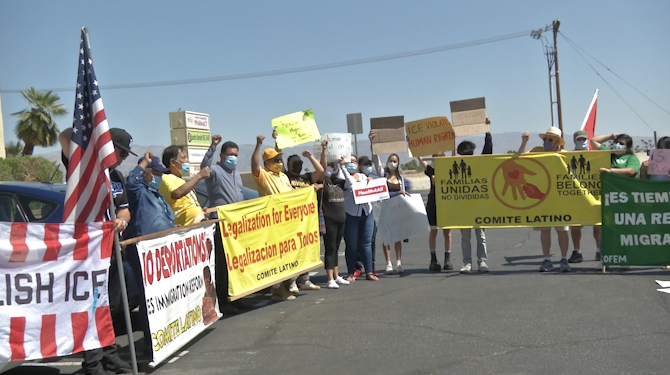 Dozens of community members gathered outside Congressman Raul Ruiz’s office in Palm Desert, carrying signs and chanting ‘Si se puede’, and calling on the Congressman to deliver on immigration reform.

“We’re here today to thank the Congressman for taking a lead role on immigration reform,” said Maribel Nunez, Executive Director of Coachella Valley Immigrant Dignity Justice Coalition. “What we ask is for them to continue to push the Senate to move forward as well.”

Members of the Coachella Valley Immigrant Dignity Justice Coalition say they want federal leaders to continue their efforts to include a comprehensive immigration reform bill, as a part of the budget reconciliation process.

“We need immigration reform now,” said a speaker at the event. “We have seen a lot of our community members die because they didn’t have access to healthcare. Many of them don’t have access to housing. We ‘ve seen some of our members live up to 3 families in a mobile home with no air conditioning in these high heats.”

“A lot of our folks are part of our communities, they pay taxes, so they should be able to be recipients of the revenue they contribute to the budget,” said Nunez.

The budget reconciliation process could allow Congress to create a legal pathway for millions of undocumented immigrants that have been promised permanent residency and citizenship for generations.

“We are halfway there,” said an event speaker. “We are one step closer, and as details for this policy continue to be developed, we also urge congress members to remember the importance of having a legislation that is inclusive and just for all… plus millions of undocumented immigrants.”

The members also want to make it clear that immigration reform isn’t just for the Latino community, but for people of all races and backgrounds.