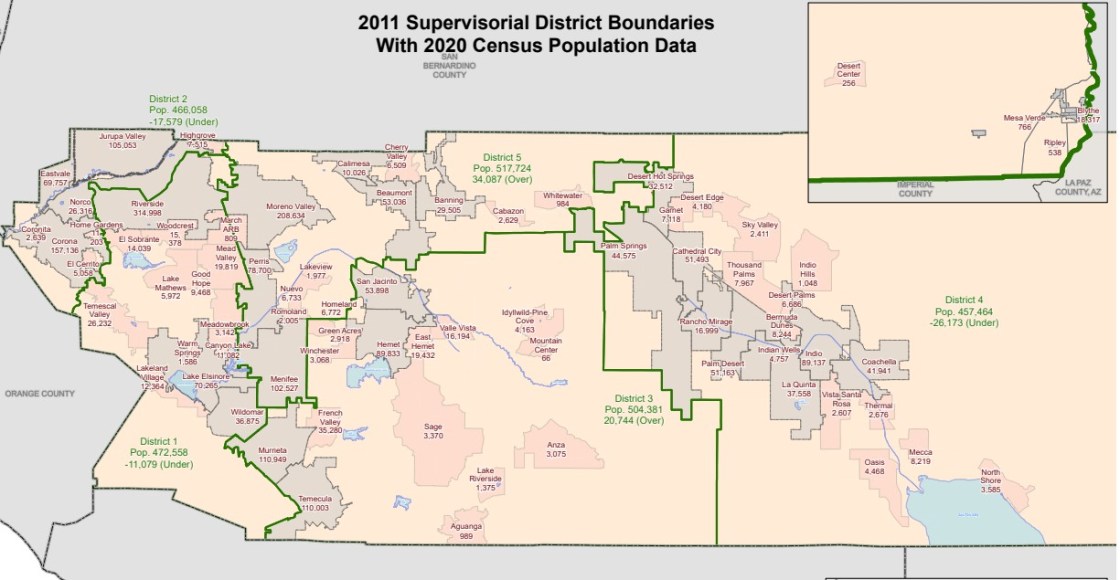 (CNS) – The Board of Supervisors Tuesday received initial testimony regarding the redrawing of supervisorial district boundaries in Riverside County, with speakers alternately seeking changes or signaling their satisfaction with the status quo, particularly in the Riverside metropolitan area.

The board’s initial public hearing set the stage for at least two additional hearings before the supervisors in December debate the proposed maps that emerge from constituents’ opinions, staff analyses and board discussions.

The target date to finalize and approve redraws is Dec. 7, though Dec. 15 is the deadline.

Among the speakers during the hearing at the County Administrative Center was Chani Beeman with the League of Women Voters, who expressed concern about the current boundaries separating the First and Second districts in the southeastern corner of Riverside.

“Social and economic interests should be kept whole,” Beeman told the board. “This requires a more holistic approach to programming.”

She asked the board to consider amending boundaries to re-unify the section of the city encompassing Canyon Crest and the Woods Streets of downtown.

Bob Halili of Jurupa Valley said the area in which he resides, within District 2, should be left alone.

“Living in the community is a positive experience,” he told the board. “We’re a diverse community, but we respect each other’s ethnic backgrounds. Keep my community together.”

Maribel Nunez with the Brown & Black Redistricting Alliance imparted the same sentiments with regard to the area tying pockets of Riverside, Highgrove and Jurupa Valley together near the Santa Ana River.

“We would like it to stay together,” she said.

Supervisor Chuck Washington acceded that it would be “frowned upon to split cities.”

“We’d like to keep them whole,” he said. “My district includes Hemet and San Jacinto. They don’t always get along, like siblings. But drawing lines that separate them would be counterproductive.”

The redistricting process was delayed five months because of the coronavirus public health lockdowns that hampered the publication of 2020 Census data by federal officials.

Under the county’s balancing policy, the benchmark goal is for each supervisorial district to be as close as possible to a population of 483,637. Variances are expected, officials said.

According to the census estimates, three districts — 1, 2 and 4 — are in a deficit, while Districts 3 and 5 have surpluses.

State and federal law require that the districts remain contiguous, meaning no gerrymandering or broken lines to fit cities and unincorporated census-designated communities into slices of one district or another.

The public will be able to weigh in again as to how mergers take place during meetings on Oct. 19 and Nov. 9.

If the supervisors cannot reach a majority vote on new boundaries, the issue would be put before a Superior Court judge for arbitration.

“It’s important to have as many people providing input as possible,” Spiegel said. “We will never get to a point where we make everybody happy.”

Municipalities will decide for themselves how to divvy up wards.

In 2011, the issue of redrawing district boundaries because of population shifts resulted in multiple hearings after the 2010 Census, which showed the number of residents countywide increasing by 42% — 644,000 people — over the previous decade.

The objective was to abide by apportionment targets. Two then- supervisors, Marion Ashley and Jeff Stone, surrendered whole cities as part of the redistricting. To break an impasse, Tavaglione ultimately relented to Buster’s proposal to envelope several neighborhoods that had historically belonged to the Second District.

Buster was defeated for re-election the following year. Tavaglione retired in 2018.

More information on the county’s redistricting plans, including where to email comments and concerns, can be found at http://www.rivco.org/about- county/county-boards-committees-and-commissions/county-redistricting-efforts.